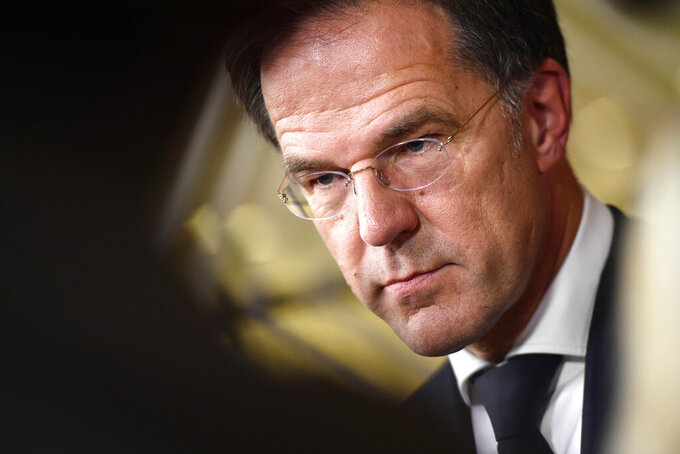 THE HAGUE, Netherlands (AP) — Dutch Prime Minister Mark Rutte met with lawmakers from his party Tuesday to discuss their concerns about the rising numbers of migrants seeking asylum in the Netherlands, amid tensions within his four-party coalition about how to tackle the issue.

The meeting followed the refusal of lawmakers in Rutte’s center-right People's Party for Freedom and Democracy to support legislation that could compel municipalities to offer accommodation to asylum-seekers. The party's opposition put it at odds with the three other parties in the coalition.

“There is no crisis,” Rutte told reporters at the Dutch parliament after he held hours of talks with his party. He said he mainly discussed how to lower the number of migrants arriving in the Netherlands, which are at the highest level since 2015.

After the meeting, the leader of the party's lawmakers, Sophie Hermans, said the party would support the legislation. But she said migration “is a much bigger question — it's also about arrivals, it's about ensuring that people who aren't entitled to be here leave the country.”

The growing number of arrivals has led to hundreds of migrants being forced to sleep outdoors in unsanitary conditions outside an overcrowded reception center for asylum-seekers in the northern Netherlands last summer.

Conditions were so bad that the Dutch branch of Doctors Without Borders sent a team there to help the migrants — the first time the aid agency had deployed in the Netherlands.

Rutte's coalition, made up of his party, two Christian-based parties and the centrist Democrats 66, has been in power since Jan. 10. It was sworn in almost exactly a year after Rutte's previous government resigned to accept political responsibility for a scandal involving the nation’s tax office that wrongly labeled thousands of parents who claimed childcare benefits as fraudsters.

The coalition, Rutte's fourth administration, has a narrow majority in the 150-seat lower house of Dutch parliament, but are in the minority in the upper house. Rutte is the Netherlands' longest-serving prime minister, having first taken office in October 2010.