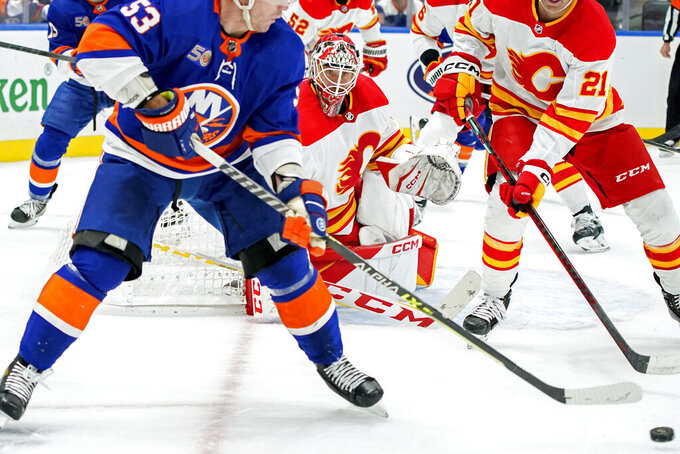 NEW YORK (AP) — Noah Dobson scored a power-play goal 4:02 into overtime and the the New York Islanders rallied for a 4-3 win over the Calgary Flames on Monday night.

Sebastian Aho, Anders Lee and Kyle Palmieri also scored as New York came back from a 3-1 deficit in the third period to get is sixth win in seven games. Mathew Barzal had three assists and Ilya Sorokin made 43 saves.

“We got to our game,” Lee said. “We were able to be the ones on the forecheck, get some pucks back, be on top of them. We went on for the third period knowing that we wanted to take this game. Right now, we are a group that knows when we are playing our game, we can make things happen.”

Mikael Backlund had two goals and Elias Lindholm also scored as Calgary lost its fifth straight game (0-3-2) — the second straight in overtime. Jacob Markstrom had 28 saves in the opener of the Flames' three-game northeast road trip after playing eight straight at home.

“I thought we played really well,” Flames coach Darryl Sutter said. “I think we were really good from the outset. We turned a couple pucks over that cost us a point.”

The Islanders had a power play in overtime after an offensive zone interference penalty on Flames defenseman Rasmus Andersson. New York controlled possession in its offensive zone for the entire man-advantage until Barzal set up Dobson for the game-winning goal. It was the defenseman's fourth of the season.

Sorokin denied Lindholm twice, once from the door step, midway through overtime to keep it tied.

“He was outstanding again,” Islanders coach Lane Lambert said of Sorokin. “He just makes key saves at key moments and you saw that in overtime.”

Calgary had a 30-12 advantage on shots through 40 minutes but the Islanders found their game in the third period, erasing a two-goal deficit with two scores in a 59-second span midway through the period.

Lee deposited a rebound for his seventh of the season at 10:08. Nelson then fired a shot from the slot that deflected off a Flames defenseman, and Lee found the puck to the side of Calgary’s goalie. Shortly after that, Palmieri’s beat Markstrom from the right face-off circle to tie it with 8:53 to go in the period.

The Flames got off to a strong start, outshooting the Islanders 18-4 in the first 20 minutes.

Backlund opened the scoring with 8:44 left in the first as he got a backhand pass from Jonathan Huberdeau and wired a shot past Sorokin's blocker.

Aho tied it 1:10 later when he got behind the Flames' defense and got a pass from Barzal to get his first of the season. It came on the Islanders first shot on goal of the game.

“Barzal is a great player, he see’s those plays before they happen,” Aho said. “I could see that they had some guys down low in our zone, I was just trying to take off and get open.”

Lindholm put the Flames back ahead with a nifty redirection of a shot by Noah Hanifin with 3:39 left in the period.

Backlund increased the Flames’ lead to 3-1 with his second of the night and fifth of the season with 5:50 left in the second. It came on Calgary’s 28th shot of the game.

Flames D Nick DeSimone made his NHL debut after being recalled from the AHL. He had one shot on goal in 9:30.

OFFENSE FROM THE BLUE LINE

The Islanders have begun the season with six consecutive wins against Western Conference opponents for the first time in franchise history.

Islanders: At the New York Rangers on Tuesday night.