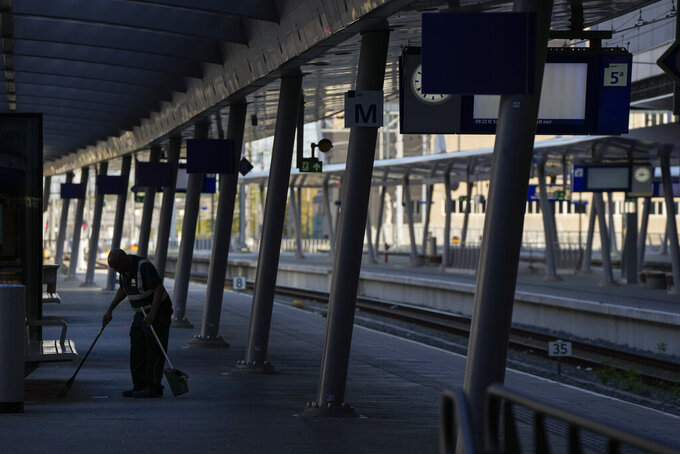 Peter Dejong, ASSOCIATED PRESS
Deserted railway platforms are seen at Utrecht central station as train services came to a near standstill in the latest in a series of strikes by railway workers hits the Netherlands, Tuesday, Aug. 30, 2022. Almost the entire Dutch railway network was shut down Tuesday as workers affected by soaring inflation and staff shortages went on strike to demand better pay and working conditions. (AP Photo/Peter Dejong)

Staff at the railway company NS stopped work for the day in the central Netherlands region that acts as a hub for almost all train lines, halting trains across the country. An exception was the line linking Amsterdam with the busy Schiphol Airport that returned to service after a strike shut it down on Monday.

Utrecht Central station, the country's biggest rail hub and normally packed with travelers, was eerily deserted Tuesday morning. Screens showing train timetables were lit up with the word “canceled” in red letters and a station announcer explained in Dutch and English that services were being hit by the strike.

NS said in a statement that international trains operated by Thalys and Eurostar were running again after being halted Monday.

Schiphol said in a warning to travelers that NS had indicated that four trains an hour would run each way between the airport and the Dutch capital's central station.

Labor unions have called a series of strikes on the Dutch rail network after negotiations on a new collective labor agreement broke down.

Commuters in the Netherlands are not alone in enduring rail strikes. The United Kingdom has been hit by a number of work stoppages over the summer on railway lines and London's subway system.