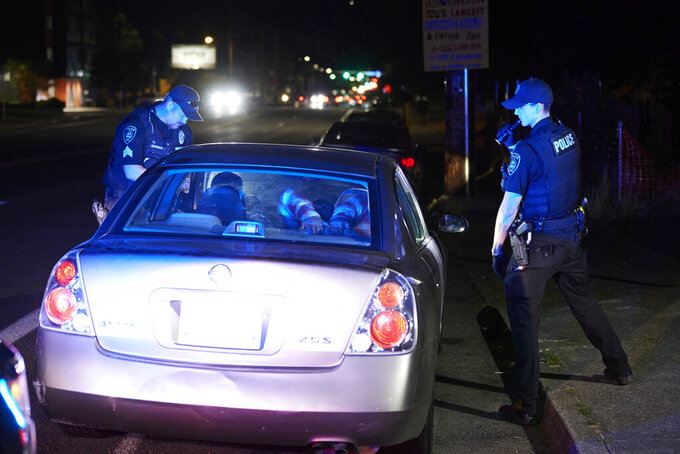 Craig Mitchelldyer, ASSOCIATED PRESS
Gresham Police Sgt. Travis Garrison, left, and Officer Ryan Gomez look inside a vehicle during a traffic stop in Gresham, Ore., Thursday, July 21, 2022. Gresham, a Portland suburb, has seen an increase in fatal shootings and gun violence at the same time as it has a shortage of officers. To address the situation, the department has shut down all of its specialized units except for its mental health unit and shifted all of its detectives to work homicides. (AP Photo/Craig Mitchelldyer)

PORTLAND, Ore. (AP) — Five years after Brian Spaulding’s parents found him fatally shot, his slaying remains a mystery that seems increasingly unlikely to be solved as Portland, Oregon, police confront a spike in killings and more than 100 officer vacancies.

Portland’s homicide rate surged 207% since 2019 and detectives working older cases are now swamped with new ones.

“To us, it’s not a cold case,” said George Spaulding, who has his son’s signature tattooed on his arm. “We’re not dissatisfied with the Police Bureau because I think they’re doing the best they can,” he said. “They are just overwhelmed. It’s insane.”

From Philadelphia to Portland to Los Angeles, killings and gun violence are rising at the same time officers worn out by the pandemic and disillusioned over the calls to divest from policing are quitting or retiring faster than they can be replaced.

Departments are scrambling to recruit in a tight labor market and also rethinking what services they can provide. Many have shifted veteran officers to patrol, breaking up specialized teams to keep up with 911 calls.

“We’re getting more calls for service and there are fewer people to answer them,” said Philadelphia Police spokesperson Eric Gripp, whose department has been rotating employees from specialty units to increase patrols.

“Departments all over are down and recruitment has been difficult.”

Los Angeles, which is down more than 650 officers from its pre-pandemic staffing, shuttered its animal cruelty unit and downsized its human trafficking, narcotics and gun details and reduced its homeless outreach teams by 80%. Seattle recently announced $2 million in hiring bonuses and benefits to lure recruits amid a critical officer shortage.

“For me, I wonder, what the profession is going to be 20 years from now if we’re having these challenges on a nationwide scale. Are we going to be able to recruit enough people to serve our cities?” asked Portland Police Chief Chuck Lovell, whose force has lost 237 sworn officers through retirements or resignations since 2020.

Portland logged a record 89 homicides last year — roughly three times its historical average — and is on pace to top that this year after already tallying more than 50. A report completed for the city last month by the California Partnership for Safe Communities found 75% of homicides in 2020 were by gun. The city has seen nearly 800 shootings this year.

That follows a national trend. While non-violent crime decreased during the pandemic, the murder rate increased nearly 30% in 2020 and the rate of assaults went up 10%, according to the Brennan Center for Justice.

Experts say widely cited theories that violent crime is worse in places that changed policing tactics in the wake of protests over Floyd’s murder don’t bear out. Violent crime has increased in red and blue communities alike, regardless of their approach.

“There’s a lot of evidence that something bigger is going on than the social justice protests that happened, and it’s probably more than one thing,” said Ben Struhl, executive director of the Crime and Justice Policy Lab at the University of Pennsylvania.

Jeremiah King, who is transitioning out of homelessness, was shot while trying to protect a friend in Portland who was being attacked just a short walk from the city’s business district.

“I didn’t feel anything at first but 10 seconds later I could hardly breathe,” King said after three nights in the hospital. “I thought I was going to pass away.”

To address the violence, Portland’s police chief broke up specialized units to bolster patrol numbers and moved detectives from assault, cold case and gun violence units to his homicide squad. That effectively stopped investigations into about 300 unsolved slayings.

Brian Spaulding’s parents now must consider the possibility that one day no one will be assigned to their son's case.

“I keep thinking that with all of the gun violence that’s going on, they might be able to get a gun that matches the gun that killed Brian,” said Carolyn Spaulding.

But what law enforcement says is a staffing crisis could actually be a case of misdirected resources, said Christy Lopez, co-director of Georgetown Law School’s Center for Innovations in Community Safety.

In some departments, police have sworn in new recruits this year, although the numbers aren’t keeping up with attrition, they say.

“You really can’t take it at face value when a department says you need more police officers. You need to look at a staffing audit: ‘What are your police officers doing? What are they unable to do?’ It might mean that you actually need another Boys and Girls Club, not more officers,” she said.

Some have celebrated the downsizing, including homeless advocates in Los Angeles, where four out of five homeless outreach teams were disbanded.

“Police should be nowhere around outreach. You can’t be the provider of services as well as the jailer,” said Pete White, the founder and executive director of the Los Angeles Community Action Network.

Still many others are fed up with perceived lack of action by police.

In Philadelphia, where the department is down 550 officers from pre-pandemic staffing and another 860 are on medical leave or restricted duty, City Councilwoman Maria Quiñones-Sánchez said there are more than 30,000 backlogged police complaints about abandoned cars.

Officers normally assigned to a unit dealing with neighborhood issues have been shifted to violent hot spots, where the homicide rate reached a record high last year.

The abandoned cars bring “trash in the areas, then you know other crimes, quality of life issues, drug dealing, shootings, killings,” said Kimberly Washington, executive director of the Frankford Community Development Corporation. “This starts to look like the place where this can all go down because no one cares.”

Growing up in Portland’s gang territory in the 1990s, his brother, two first cousins, two second cousins and numerous friends were shot to death — and many of those cases remain unsolved.

Harris supports the temporary shut-down of the city’s cold case unit if it means police can close fresh cases, even though it takes resources from solving his own loved ones’ slayings.

“Under the current climate, somebody’s going to feel cheated and we have to be honest with that. The question is, who do we cheat?” he said. “These hard decisions (have) to be made to stop this.”