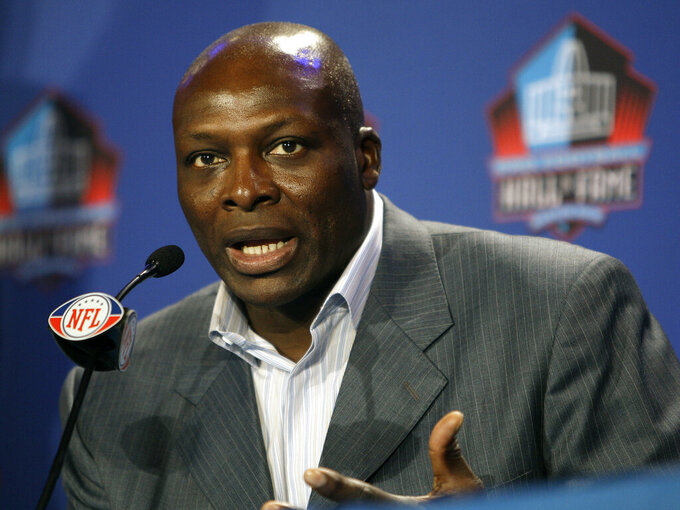 BUFFALO, N.Y. (AP) — Bruce Smith never had a problem with Tony Boselli, and can’t wait for the left tackle to join him as a member of the Pro Football Hall of Fame.

It’s another story for some of Boselli’s supporters, and the claims they made in making the case for the Jacksonville Jaguars lineman to earn induction in February, which bothered the NFL’s career leader in sacks.

“Tony and I are cool,” Smith told The Associated Press on Thursday, saying the two former players have spoken by phone to clear up any confusion.

“Tony and I have no beef with each other. And I hope and I’d like to see Tony enjoy this process,” Smith added. “But I needed to address several of his campaign supporters because it set a bad precedent.”

Smith is referring to the eyebrows he raised and “Hall of Fame feud” headlines he generated after posting a lengthy note on his Instagram account Tuesday.

“On the one hand, I’m quite flattered to be considered the gold standard by which another player’s game can be measured to determine his qualification into the HOF,” wrote Smith, who finished with 200 sacks over a 19-year career with a majority of it spent with the Buffalo Bills. “But on a more serious level, I and other HOFers believe it sets a horrible precedent to negatively zero in on a standing member of the Hall’s play in order to validate the candidacy of a nominee.”

At issue with Smith is how Boselli’s supporters focused in on one specific game, Jacksonville’s 30-27 win over Buffalo in the AFC wild-card round after the 1996 season, in which comparisons were made between the two players. It was an outing in which Boselli limited the NFL’s Defensive Player of the Year that season to three tackles and two quarterback pressures.

Smith considered that argument to be out of bounds, or “underhanded” as he wrote, because it pits a hall of fame hopeful against a hall of fame member. And, he added, a player’s entire body of work should be up for consideration, and not just one game.

“Statements that were made addressing, disparaging, attacking a sitting member of the Pro Football Hall of Fame in that fashion are unacceptable,” Smith said. “This needs to be nipped in the bud right now before it happens again.”

He feared a precedent could be set in leading to hall of fame members being forced to react by speaking out against candidates for induction. And that’s why, Smith said, he waited until long after the voting process was completed to express his concerns.

“I did not want to put my thumb on the scale while the voting process was taking place,” Smith said. “Publicly, we don’t go out and say anything negative about any candidate.”

Boselli went to five Pro Bowls, was selected as a first-team All-Pro three times, was a member of the NFL 1990s All-Decade Team and allowed 15½ sacks in 91 games.

“I have the utmost respect for Bruce Smith,” Boselli said in a statement released to The Associated Press. “He’s one of the greatest players to ever play the game and is one of several men I competed against during my career. I played the games I played, and they’re all on tape for anyone to watch. My career ending early because of a shoulder injury has been much discussed. I don’t have much to add on that.”

Smith previously spoke highly of Boselli, and even introduced him at NFL Honors in February as part of the 2022 HOF class.

As for his post, Smith said those who criticized him for it failed to grasp the point he was making.

“I’m not going to comment on folks that want to make headlines in terms of my making a statement addressing several supporters for his campaign. My letter speaks for itself,” Smith said. “That’s all I can say about the subject. Tony and I are cool. I will be there to welcome him to the Class of 2022. And that’s it.”