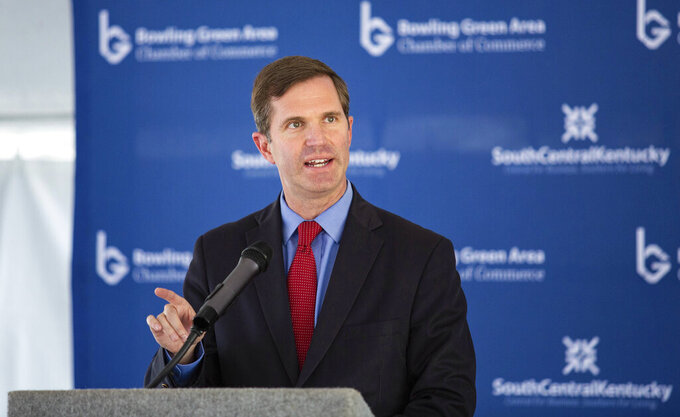 Grace Ramey, ASSOCIATED PRESS
FILE - Kentucky Gov. Andy Beshear speaks at the Kentucky Transpark in Bowling Green, Ky., on June 2, 2022. Beshear on Thursday, June 30, 2022, denounced a Kentucky law designed to impose a near-total ban on abortions as “extremist,” pointing to the lack of exceptions for rape and incest victims as he pushed back on an issue that Republicans have made a policymaking priority. (Grace Ramey/Daily News via AP, File)

FRANKFORT, Ky. (AP) — Democratic Gov. Andy Beshear on Thursday denounced a Kentucky law designed to impose a near-total ban on abortions as “extremist,” pointing to the lack of exceptions for rape and incest victims as he pushed back on an issue that Republicans have made a policymaking priority.

The ruling by Jefferson County Circuit Judge Mitch Perry on Thursday allowed abortions to resume in Kentucky. There are two abortion clinics in Kentucky — both in Louisville, the state's largest city.

Beshear, who faces a tough reelection campaign next year, was asked repeatedly about the now-blocked trigger law during his weekly news conference. Several Republicans already running for governor are playing up their opposition to abortion. Beshear supports abortion rights but with “reasonable restrictions,” which he's previously said would apply to late-term abortion procedures.

The governor's criticism of the trigger law was aimed at what's missing from the measure.

“The trigger law is an extremist law that the vast majority of Kentuckians disagree with," he said. "It provides zero exceptions for victims of rape and incest, giving them no options despite the fact that they have been harmed and what they’re going through is ... absolutely zero fault of their own.”

The trigger law was enacted when Beshear was the state's attorney general.

Kentucky's current attorney general, Republican Daniel Cameron, is defending the trigger law in court. He said the ruling temporarily blocking the measure had no basis in the state constitution. Later Thursday, Cameron asked the state Court of Appeals to block the lower court ruling that suspended the trigger law and another Kentucky law that attempted to prevent abortions at six weeks of pregnancy. That measure was previously halted by a federal court.

Cameron is among the Republicans vying to challenge Beshear in the 2023 election.

“We will do everything possible to continue defending this law and to ensure that unborn life is protected in the commonwealth,” Cameron said in a statement.

State GOP spokesperson Sean Southard noted Thursday that some Democrats in the Republican-dominated legislature voted for the trigger law. He asked whether Beshear thinks those Democrats are “so-called extremists.”

Beshear said that during his tenure as attorney general, he encountered rape and incest cases involving girls. Under the trigger law, they would have “zero options and that’s wrong,” he said.

“Right's right and wrong's wrong, no matter who voted what way,” the governor said.

In comments directed at his Republican critics, the governor added: “Do they believe that it’s not extremist to remove every option from rape and incest victims? Will they look them in the eye and tell them that?"