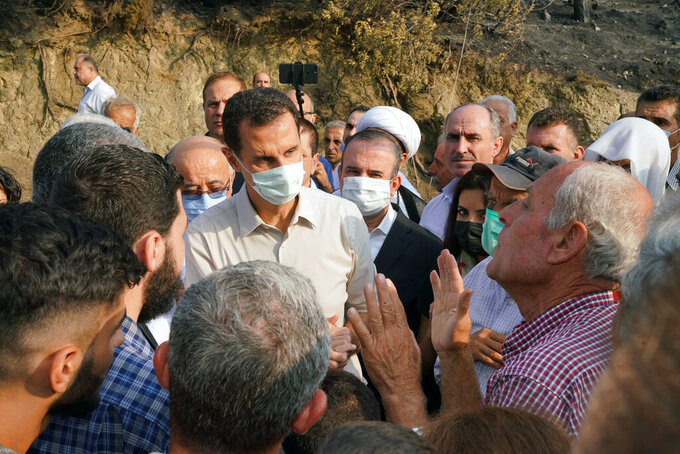 Uncredited, ASSOCIATED PRESS
FILE - In this file photo released Oct. 13, 2020 on the official Facebook page of the Syrian Presidency, Syrian President Bashar Assad, center left, wearing a mask to help prevent the spread of the coronavirus, speaks with people during his tour of areas that suffered heavy damage from deadly wildfires, in the Syrian coastal province of Latakia. Syria executed 24 people Thursday, Oct. 21, 2021 after charging them with igniting wildfires last year that left three people dead and burnt thousands of hectares (acres) of forests, the Justice Ministry said. (Syrian Presidency via Facebook via AP, File)

The publicized executions of a large group of people is rare in war-torn Syria, where a decade-old conflict has left hundreds of thousands dead and displaced half the country’s population, including 5 million refugees outside the country.

Wildfires broke out in several Middle Eastern countries in October 2020 amid a heat wave that was unusual for that time of the year, leaving Syria particularly hard-hit. Three people were killed in the blazes, which also burned wide areas of forests, mostly in government-controlled regions of Latakia and the central province of Homs.

President Bashar Assad’s hometown of Qardaha in Latakia province was hard hit by the fires, which heavily damaged a building used as storage for the state-owned tobacco company, part of which collapsed. Assad made a rare visit to the region shortly after the fire was brought under control.

A statement issued by the Justice Ministry Thursday said those executed a day earlier were “criminals who carried out terrorist attacks that led to deaths and damage to state infrastructure and public and private property through the use of flammable material.” It said 11 others were sentenced to life in prison in the same case.

The statement did not provide further details on the circumstances of the executions or how they took place. For civilians, the death penalty in Syria is usually carried out by hanging. Syrian laws allow for the death penalty for offenses including terrorism, espionage, treason, arson and army desertion.

She added that death sentences are often passed through secret trials or during court proceedings which lack basic safeguards such as the right to a lawyer, and with confessions routinely extracted under torture or other ill treatment and duress.

In 2017, a report by Amnesty International said as many as 13,000 people were executed in secret mass hangings at the Saydnaya prison in Syria between September 2011 and December 2015, at the height of the Syrian civil war. It said the alleged executions were authorized at the highest levels of the Syrian government.

The report said that between 20 and 50 people were hanged each week, sometimes twice a week, at the Saydnaya prison in what the organization called a “calculated campaign of extrajudicial execution.” U.N. human rights experts have also reported the mass killing of detainees held by the government in official and makeshift detention centers that often take place out of sight.

Those executed Wednesday were among dozens of people detained in late 2020 who confessed that they began planning to ignite fires starting in August last year, the Justice Ministry statement said. They started fires in September that affected 280 towns and villages and damaged 370 homes, the ministry added.