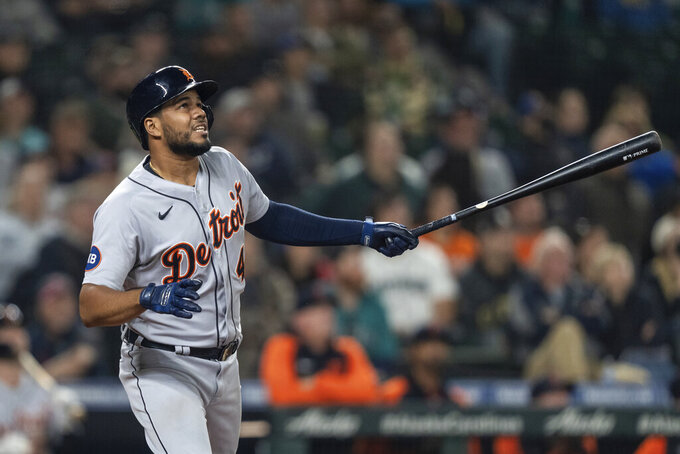 Stephen Brashear, ASSOCIATED PRESS
FILE - Detroit Tigers' Jeimer Candelario takes a swing during an at-bat in the second game of a baseball doubleheader against the Seattle Mariners, Oct. 4, 2022, in Seattle. Candelario agreed to a one-year deal with the Washington Nationals on Tuesday, Nov. 29, giving the club someone to compete for a starting job at third base. (AP Photo/Stephen Brashear, File)

WASHINGTON (AP) — Infielder Jeimer Candelario agreed to a one-year deal with the Washington Nationals on Tuesday, giving the club someone to compete for the starting job at third base.

The 29-year-old Candelario is a switch-hitter who is coming off a down year for the Detroit Tigers, hitting just .217 with a .272 on-base percentage in 2022.

Candelario became a free agent 10 days ago when the Tigers declined to offer him a contract for next season.

Washington, which finished with the worst record in the majors in 2022, also has Carter Kieboom — a first-round pick in the 2016 amateur draft who missed all of last season after reconstructive elbow surgery — and Ildemaro Vargas — a 31-year-old who hit .280 in 53 games after joining the Nationals — at third base.

In another move announced Tuesday, the Nationals agreed to a major league deal with outfielder Stone Garrett. The 27-year-old Garrett batted .276 in 27 games as a rookie for the Arizona Diamondbacks this year.