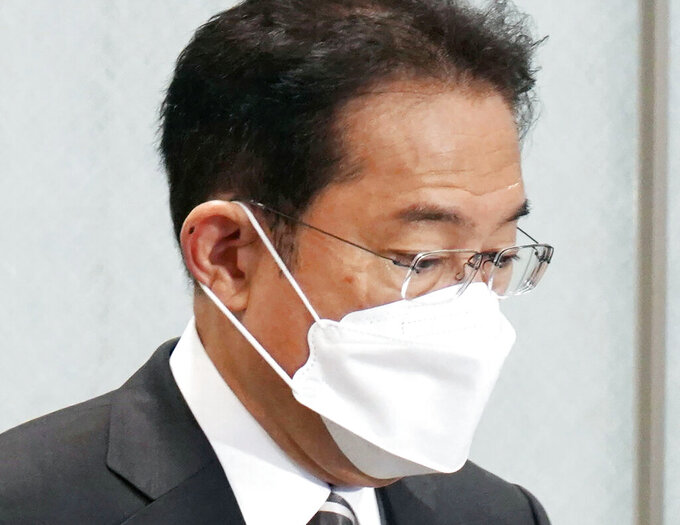 Uncredited, ASSOCIATED PRESS
Japanese Prime Minister Fumio Kishida speaks to reporters in Tokyo Monday, Oct. 25, 2021, a day after by-elections in Shizuoka prefecture, central Japan. Kishida lost one of two parliamentary seats contested in the weekend by-elections seen as a major test ahead of a crucial national vote that could determine how long his government may last. (Kyodo News via AP)

TOKYO (AP) — Japan's governing party split two parliamentary seats in weekend byelections seen as a major test of its support ahead of a national vote next Sunday.

Both seats are in the upper house of Japan’s Diet, or parliament, which is not subject to the Oct. 31 elections for the more powerful lower chamber, but they were seen as a bellwether for Prime Minister Fumio Kishida's government.

His Liberal Democratic Party had previously held both seats. It lost to an opposition-backed candidate in a tightly contested vote for a vacant seat in Shizuoka prefecture, while the LDP candidate won the other seat in Sunday's byelections in the party’s traditional stronghold of Yamaguchi prefecture, home to former leader Shinzo Abe.

Even though media surveys widely expect the LDP and its junior coalition partner Komeito to keep a majority of the 465 seats in the lower house, losing ground from the 305 it held before the election would be a bad start for Kishida's weeks-old administration.

“We had a disappointing result in Shizuoka,” Kishida told reporters Monday. “I will seriously take the judgment of the voters and will seriously endeavor for (Sunday’s) elections.”

In the vote for the seat representing the prefecture south of Tokyo, former prefectural assembly member Shinnosuke Yamazaki, supported by opposition groups, the Constitutional Democratic Party of Japan and the Democratic Party for the People, beat the LDP-backed Yohei Wakabayashi, a former mayor, and a third candidate backed by the Japanese Communist Party.

“The result reflected discontent of many voters who want to change politics after seeing their lives continue to deteriorate during the pandemic,” Azumi said.

In Yamaguchi prefecture, the LDP-backed Tsuneo Kitamura beat a communist candidate and a former YouTuber.

Kishida took office on Oct. 4 with the immediate task of rallying party support weakened by a perceived high-handed approach to the pandemic and insistence on holding the Tokyo Olympics. He dissolved the lower house only 10 days after taking office, saying he wanted a mandate from the public for his new government.

Major issues in the lower house campaign include COVID-19 response measures and revitalizing the pandemic-battered economy, as well as diplomatic and security issues linked to China’s growing strength and influence and North Korea’s missile and nuclear programs.

The campaign already has been rocky for the LDP, with media polls showing support for Kishida's weeks-old government sliding.

Kishida said he aims for the coalition to secure at least a majority of seats, or 233, in the chamber. That would be an easy target but experts and media polls predict that the LDP may lose about 30 seats.