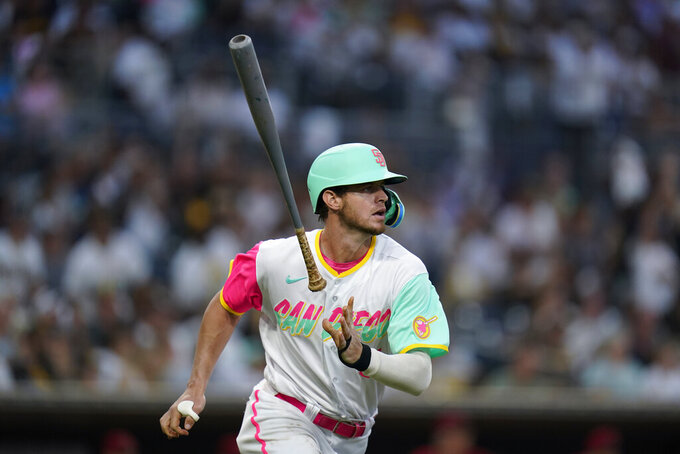 The Padres came into the day in a virtual tie for the second NL wild-card spot with the Philadelphia Phillies, who beat Miami. San Diego opened a four-game lead in the wild-card race over fading Milwaukee, which lost to Colorado.

“It was nice to win the two games after a tough first one (in the series versus Arizona),” Melvin said. “We are seeing some balls leave the ballpark here. We have the ability to slug — that showed up tonight after being down 2-0. To be able to respond right away and come right back I think kind of shifted the momentum back into our dugout.”

Arizona’s Daulton Varsho hit two solo homers off Darvish (13-7) to give him 24 for the season.

“I wasn’t at my best, for sure, tonight. I don’t think I had the stuff tonight,” Darvish said through an interpreter. “I just tried to be a little bit aggressive in the zone.”

“He hung a couple of breaking balls for some homers but you look up and it is only five hits. He did walk three guys and that’s what ended up getting him out of the game,” Melvin said. “I think he will always tell you he always wants to go farther than six (innings). He thinks six is the minimum."

San Diego closer Josh Hader earned his 31st save — and second with the Padres — with a scoreless ninth. Robert Suarez and Nick Martinez chipped in scoreless single-inning stints as well.

“It looks like his mechanics are better and he is throwing it more where he wants to,” Melvin said. “He is throwing the ball over the plate and not getting behind.”

In addition to Profar’s homer in the second inning, the Padres got solo shots from Jake Cronenworth (3 for 3) and by Wil Myers (150th career homer).

Arizona’s Corbin Carroll — who made his MLB debut Aug. 29 — hit his first homer in the second inning, going back-to-back with Varsho.

San Diego’s Juan Soto was hit in the right shoulder blade in the third inning by Henry. Soto stayed down in a crouch in pain in the batter’s box for about a minute before walking slowly to first base. He played defense in the fourth inning before being replaced in the top of the fifth inning.

Melvin said Soto has a right shoulder contusion but hopefully he will be able to play on Friday when the Padres open a three-game series versus the Los Angeles Dodgers at Petco Park.

“I think he is going to be okay, hopefully after an off-day,” Melvin said. “Initially when you get hit, kind of the strength goes away. He tried to go in the cage and swing a little bit and it wasn't great. But these things happen during the course of a season. Hopefully after a full day's rest he will be able to go the next day."

Padres: INF Brandon Drury (concussion) was hit on the cheek flap on Sept. 2 by Los Angeles Dodgers pitcher Dustin May. Drury was placed on the 7-Day IL on Sept. 5, retroactive to Sept. 3. Drury is eligible to return this Saturday for a rematch against the Dodgers. However, Padres manager Bob Melvin offered no indication of when Drury might be available, noting only that he’s been making incremental progress. ... RHP Pierce Johnson (right elbow tendinitis) is expected to return sometime in September. He landed on the 60-Day IL in late April and began a rehab sting in August. In his first six rehab appearances, Johnson posted a 1.50 ERA. He has yet to throw on back-to-back days, which is potentially the final step before his return.

Diamondbacks: After an off day Thursday, RHP Zack Davies (2-3, 3.74) starts the opener of a three-game series at the Colorado Rockies.

Padres: After an off day Thursday, the Padres host a three-game series against the Los Angeles Dodgers.