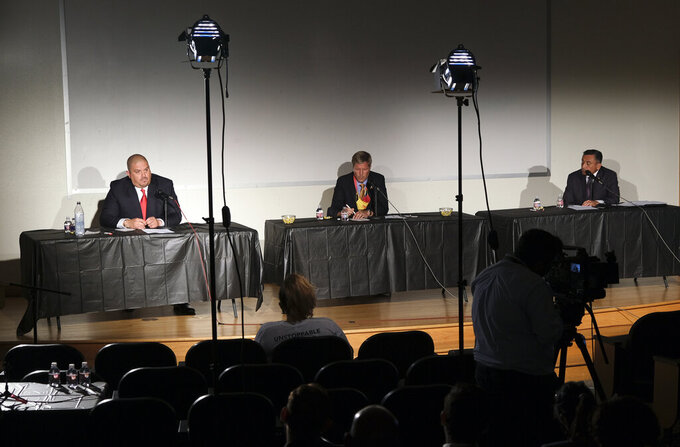 SANTA FE, N.M. (AP) — Nearly 13,000 absentee and early ballots have been cast in local elections that will determine the next mayors of New Mexico's largest city as well as its state capital, with two weeks remaining before Election Day.

The secretary of state's office on Tuesday released its first tally of voter participation in the consolidated Nov. 2 election for local government offices including school boards and bond initiatives that influence local tax rates. More than 25,000 absentee ballots have been requested.

Progressive Democratic Mayors Tim Keller in Albuquerque and Alan Webber in Santa Fe are running for reelection in three-way races.

In Albuquerque, Keller is vying against Democratic Bernalillo County Sheriff Manny Gonzales and conservative talk radio show host Eddy Aragon. Concerns about crime and homelessness have been prominent in the contest.

Though local elections are nonpartisan, registered Democrats are dominating early participation among voters, casting about 60% of ballots statewide, 63% in the Albuquerque area and 85% in Santa Fe County.

Statewide voter turnout in the consolidated 2019 local election was 224,000, or 18.11% of registered voters, with just one major mayoral race on the ballot in Las Cruces.

Balloting options expanded Saturday to include a variety of early voting centers that typically open near midday and accept voters into the evening, with some variation by county.

Voting began on Oct. 5 at county clerks' office and with the distribution of absentee ballots that can be dropped off or sent by mail.