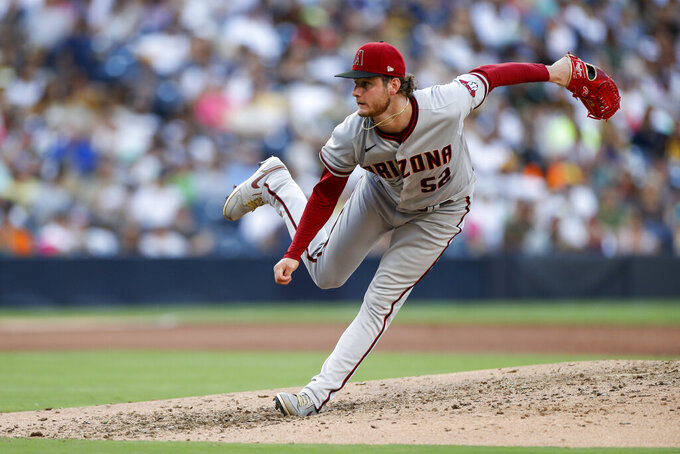 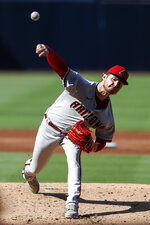 SAN DIEGO (AP) — Arizona right-hander Ryne Nelson allowed a double to Jurickson Profar on the third pitch of his big league career and went right back to work.

He retired Juan Soto, Manny Machado and Josh Bell, and didn't stop there. Nelson was brilliant in his big league debut, allowing just four hits in seven innings and retiring 17 straight batters from the first into the sixth to lead the Diamondbacks over the San Diego Padres 5-0 on Monday.

The 24-year-old Nelson said he was nervous Sunday night and Monday morning.

“Once I got out there and threw the first strike, it all went away and I played the game I’ve been playing forever,” he said afterward.

After Nelson (1-0) allowed Profar’s leadoff double in the first, he didn't permit another runner until Profar doubled into the right field corner with two outs in the sixth and took third on a throwing error by Jake McCarthy. Profar was stranded when Juan Soto flied out weakly to center and slammed his bat down in frustration.

“I know that to give myself the best shot I have to be aggressive and throw the ball over the plate,” Nelson said. “If I start falling behind it’s going to spiral real quick, so I just tried to get ahead, throw all my pitches for strikes and let the game happen.”

Nelson said he was “mildly aware” of sitting down all those Padres in a row.

“I knew that there hadn’t been a hit in a while,” he said. “I was getting ahead of guys, the fastball wasn’t really getting squared up, too much, offspeed was working and I threw some good chase pitches, too. Pretty much everything.”

The Padres had runners on first and second with two outs in the seventh before designated hitter Matt Beaty, batting just .095, flied out weakly to right.

Nelson struck out seven and walked none on 87 pitches.

The Diamondbacks selected Nelson's contract from Triple-A Reno. He was a second-round pick in the 2019 amateur draft. He was 10-5 with a 5.43 ERA in 26 starts with the Aces this season.

“We're proud of him for coming in here and slowing the game down and executing pitches,” manager Torey Lovullo said. “There's small concerns with the lineup that he had to face but he eliminated that quickly. You could tell he was on the attack and did a great job."

“Everything worked out really well for him,” the manager added. “The early test got him through probably that nervousness that pushed him through the rest of the game.”

Arizona won for the ninth time in 11 games. San Diego, which came in with a half-game lead over Philadelphia for the NL's second wild-card spot, lost its third straight game. The Padres were shut out for the ninth time, with six coming at home.

Fellow Diamondbacks rookie Stone Garrett hit a solo homer off Steven Wilson with two outs in the seventh for a 2-0 lead. It was his third.

Garrett doubled off Blake Snell (6-8) with two outs in the second and scored on Alek Thomas' double.

Christian Walker hit a two-run single in the eighth off Nick Martinez. Thomas added a a sacrifice fly in the ninth.

Snell struck out 10 in six innings while allowing one run on four hits. He walked one.

The Padres handed out free bottled water and sunblock due to a heat wave that has gripped San Diego. It was 87 degrees at first pitch at 3:41 p.m.

Padres manager Bob Melvin said LHP Sean Manaea will miss his next start Friday night at home against the Los Angeles Dodgers in hopes that it will “rejuvenate the arm a little bit." Manaea allowed eight runs and nine hits over 4 1/3 innings while allowing three home runs in a 12-1 loss at Dodger Stadium on Saturday night. Manaea has given up 14 runs total in consecutive starts against the Kansas City Royals and Dodgers. Melvin said Manaea likely will be skipped just the one start.

Diamondbacks: Recalled INF Yonny Hernandez from Triple-A Reno and placed him on the 60-day injured list with a strained left calf.