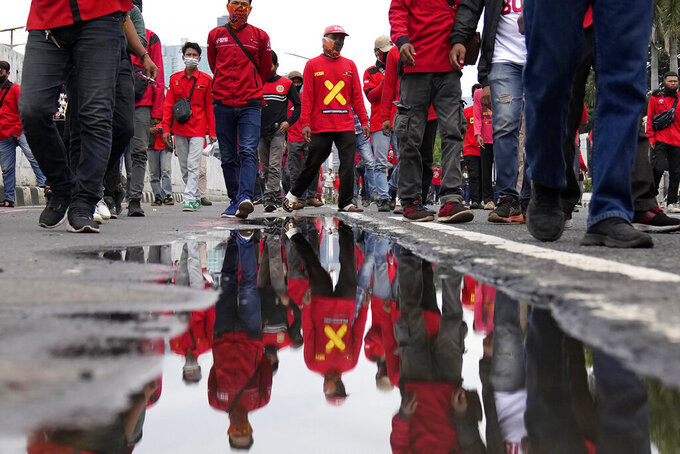 Dita Alangkara, ASSOCIATED PRESS
Reflections of protesters are seen on a puddle as they march towards the parliament during a rally in Jakarta, Indonesia, Thursday, April 21, 2022. Hundreds of protesters, mostly students, took to the streets Thursday in Indonesia's capital, voicing concern over rumors that the government is considering postponing the 2024 presidential election to allow President Joko Widodo to remain in office beyond the two-term legal limit, calling it a threat to the country's democracy. (AP Photo/Dita Alangkara)

JAKARTA, Indonesia (AP) — Hundreds of protesters, mostly students, took to the streets Thursday in Indonesia’s capital, voicing concern over rumors that the government is considering postponing the 2024 presidential election to allow President Joko Widodo to remain in office beyond the two-term legal limit, calling it a threat to the country’s democracy.

The demonstrators also railed against soaring food and oil prices, a controversial job law and the targeting of activists who oppose government policies.

Labor unions, farmer organizations and women’s groups also joined the protests, which were reignited following another demonstration on April 11 in front of the Parliament building in Jakarta, where police used tear gas and water cannons to disperse the crowds, and in other cities across the country. Calm had largely returned over the past 10 days.

Authorities in Jakarta on Thursday blocked streets leading to the heavily guarded presidential palace and Parliament building. Protesters had marched there to demand that lawmakers not delay the election or amend the constitution to allow Widodo to run again in 2024.

Widodo has denied that his administration is attempting to delay the vote after senior politicians, including a close ally, supported the idea, and he ordered the Cabinet to confirm that the election has been set for Feb. 14, 2024.

Despite denials, doubts about his intentions have persisted.

Thursday's protest involved about 800 people, according to Jakarta police spokesman Endra Zulpan, who said that the crowd dispersed peacefully as darkness fell.

The protesters slammed the country’s widely criticized Job Creation Law, which was declared unconstitutional in a Constitutional Court ruling last November, and urged the government and legislature to call off the ongoing deliberations to amend it. Critics have charged it would cripple labor rights and harm the environment.

Demonstrators also demanded that the government stop alleged violence against and oppression of activists who defend the rights of the underprivileged, including those displaced by government development projects, as well as opponents who criticize the Widodo administration.

The National Police have been under fire for allegedly using excessive force against suspected criminals and abusing the law by criminalizing critics and activists.

Protesters near the blocked streets to the presidential palace were seeking a meeting with Widodo. They booed the president for failing to meet them. A speaker read out their demands including that the government immediately reduce the price of fuel and basic foods, including cooking oil, which skyrocketed in recent months, and raise wages to counter inflation.

“We will keep fighting and the wave of demonstrations will continue if the government doesn’t listen to our demands,” a speaker standing atop a small truck shouted at the crowd.

Powerful political figures, including Cabinet ministers Luhut Binsar Pandjaitan and Airlangga Hartarto, who is also chair of the Golkar party in the governing coalition, have suggested that the election should be delayed.

Supporters have argued that Widodo needs more time to deal with the economy, which slumped during the pandemic, and complete his agenda, including a $35 billion project to relocate the capital to the island of Borneo.

Presidents are limited to two terms under the first amendment to the Indonesian Constitution, which was passed in 1999, a year after dictator Suharto was toppled by massive pro-democracy protests.

Suharto ruled Indonesia for more than three decades under an authoritarian, often violent regime. During his rule, corruption and rights abuses became rampant as the elite plundered the economy. His downfall ushered in democracy, and the term limit is meant to prevent a repeat of the authoritarian past.