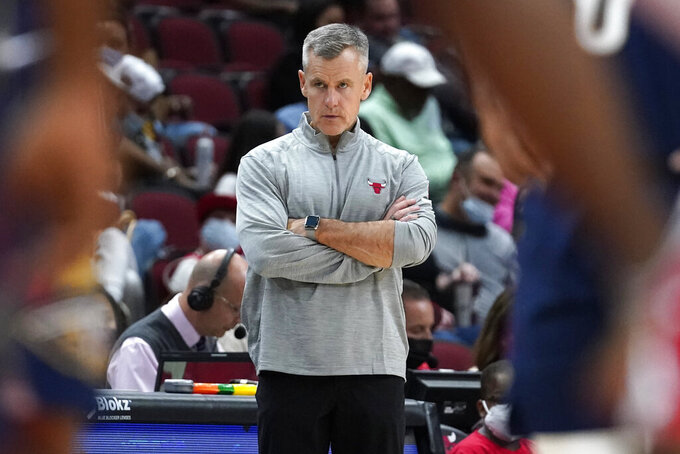 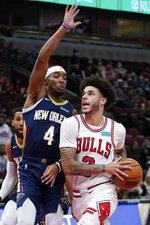 He would love nothing more than to make the playoffs at long last, and the Bulls might be in position to do just that.

After trading for two-time All-Star center Nikola Vucevic at the deadline last March, they added four-time All-Star DeMar DeRozan and point guard Lonzo Ball in the offseason. All those moves have the Bulls thinking better days are coming.

LaVine has never played on a team that made the postseason. It's something he hopes to change in his eighth year in the league and fifth with the Bulls.

LaVine set career highs last season in points per game (27.4), field-goal percentage (50.7) and 3-point accuracy (41.9%) and made his first All-Star team. He followed that up with a gold medal playing for the United States in Tokyo, an experience he said was “incredible.”

Now, he has his sights set on making the Eastern Conference playoffs. And so do the Bulls, after four straight losing seasons.

The changes have the Bulls thinking they're ready to make a big jump in the Eastern Conference after finishing 11th at 31-41 in their first year under coach Billy Donovan. Their most recent playoff appearance was in 2017. They haven't advanced in the postseason since 2015, when they beat Milwaukee and got knocked out by LeBron James and the Cleveland Cavaliers in the conference finals. Former coach Tom Thibodeau was then fired.

The Bulls open the season Oct. 20 at Detroit.

Two players remain from the team Karnisovas inherited in April 2020, and only LaVine has been in Chicago longer than 2019 first-round draft pick Coby White.

After making the big trade at the deadline last season to get Vucevic from Orlando for Otto Porter Jr. and Wendell Carter Jr., the Bulls' basketball boss was busy in the offseason. While Ball, DeRozan, Alex Caruso and Tony Bradley were added, gone are Lauri Markkanen, Thaddeus Young, Tomas Satoransky, Garrett Temple and Daniel Theis.

One big question is how quickly Donovan can get the Bulls to mesh, with all their new parts. That could take time, particularly if Patrick Williams misses the start of the season.

The second-year pro sprained his left ankle during an optional workout on Sept. 15. Williams started 71 games and averaged 9.2 points and 4.6 rebounds last year after being drafted out of Florida State with the No. 4 overall pick.

The Bulls figure to have no trouble scoring. The question is their defense. Chicago ranked 23rd in opponents' field-goal percentage and 28th in steals. DeRozan and Vucevic are more offense-oriented and so is LaVine, though he did focus more on his defense with Team USA. That means Ball and Williams could be carrying a heavy load on defense.

White figures to be in the sixth-man role after starting 54 of the 69 games he played last season. And it just might be the ideal spot for the combo guard, who finished a rocky season on a strong note and averaged 15.1 points and 4.8 assists.

The bench also figures to get a boost with the signing of guard Alex Carusa to a four-year, $37 million deal. He averaged 5.9 points while shooting about 43% in four seasons with the Los Angeles Lakers.

The Bulls have said they are committed to keeping LaVine for the long term. It won't be cheap. LaVine is looking at another huge payday with his four-year, $80 million contract set to expire at the end of the season. He would be eligible for a supermax deal if he is All-NBA in 2021-22.