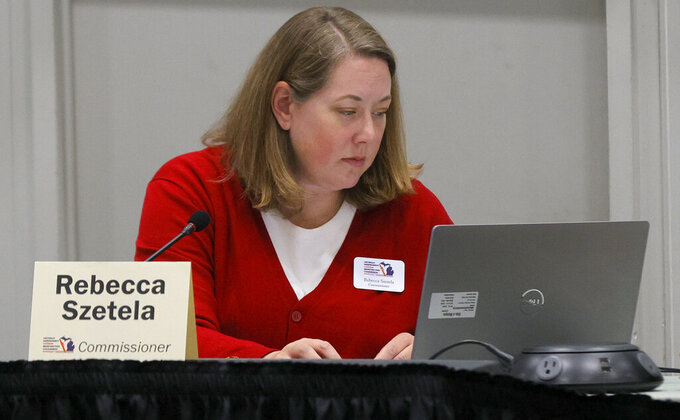 Eric Seals, ASSOCIATED PRESS
Rebecca Szetela, of the Michigan Independent Citizens Redistricting Commission, looks over maps on her laptop during an independent redistricting commission meeting at Cadillac Place in Detroit, Wednesday, Sept. 1, 2021. The commission met to talking about and work with mapping consultants on drawing lines for various voting districts in the state of Michigan. (Eric Seals/Detroit Free Press via AP)

LANSING, Mich. (AP) — Members of Michigan's redistricting commission are urging residents to speak up about draft congressional and legislative maps.

The first of five public hearings will be held Wednesday in Detroit. The panel wants feedback on 10 maps it drew collaboratively along with several more that were proposed by individual commissioners.

“Show up, speak up. We need the input from our citizens. It's a citizen-driven process to draw fair maps,” said MC Rothhorn, one of four Democrats on the commission, which also includes four Republican and five members who affiliate with neither major party.

The voter-created panel is responsible for the once-a-decade, post-census redistricting process instead of the Legislature, which controlled map drawing the last two decades and was criticized for partisan gerrymandering. Courts previously oversaw redistricting after a prior apportionment commission deadlocked and later was declared invalid.

Public meetings also are scheduled for Thursday in Lansing, Friday in Grand Rapids, Monday in Gaylord and Oct. 26 in Flint. People will have 90 seconds to speak, in person or virtually.

Commissioners said they are open to making changes to the drafts, including wholesale ones. They must factor in criteria such as keeping “communities of interest” together and ensuring the maps do not disproportionally favor one political party.

“We're certainly not taking the position that these maps are done by any stretch of the imagination. So if major changes need to be made, then I think we're ready and willing to make them,” said chair Rebecca Szetela, an unaffiliated member.

The drafts would be fairer to Democrats on a partisan basis than the maps drawn by GOP lawmakers in 2011. But the African American community in Detroit is mobilizing in opposition over fears that it would be harder to elect Black legislators.

Commissioners said they are awaiting voter-turnout data to help assess concerns that Black candidates would be unable to win. The commission plans to vote Nov. 5 on maps and, following a 45-day comment period, adopt final maps by late December.