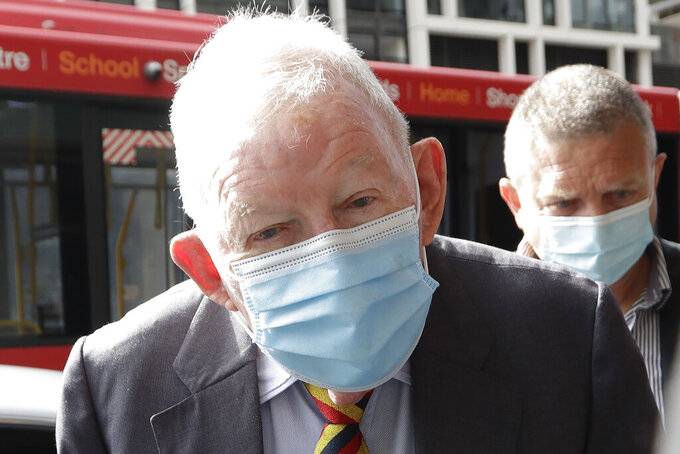 SYDNEY (AP) — One of New Zealand’s best-known businessmen Ron Brierley was sentenced in a Sydney court on Thursday to 14 months in prison for possessing thousands of child sex abuse images.

The 84-year-old former corporate raider had pleaded guilty to the charges in New South Wales state District Court in April, but was released on bail until his sentencing.

Brierley, who has admitted having a lifelong obsession with young girls, was arrested at Sydney International Airport in 2019.

The convictions related to 40,000 images found on devices in his airport luggage and at his home in Sydney.

His lawyers had argued against a prison sentence and said a community penalty would be appropriate.

But Judge Sarah Huggett ruled that anything short of imprisonment would be “manifestly inadequate.” She accepted his expression of remorse and that he acknowledged the harm of his actions, but rejected the contention that he didn't know the images were illegal.

Huggett sentenced him to 14 months in prison with a non-parole period of seven months. He faced a potential maximum of 10 years.

The judge noted the vast number of images, the many victims involved, the long-term possession of the material and his motivation being the sexual interest in girls.

“The offender’s fall from grace has been radical,” she said, noting he had previously contributed to charitable and other community works.

Brierley in the 1970s and ’80s executed a series of aggressive business maneuvers that grew Brierley Investments Ltd. into one of New Zealand’s largest corporations. His profile had faded somewhat following the 1987 stock market crash, but he continued to make business deals in New Zealand and in his new home of Australia.

Following his guilty plea, he was stripped of a knighthood and his name was scrubbed from a theater and sports field at the New Zealand high school he had attended, Wellington College.

“Offenders like Brierley fuel an abhorrent trade that requires children to be sexually degraded, exploited and violated in front of cameras. His countless girl victims will carry a psychological burden for the rest of their lives," Ritchie said in a statement.