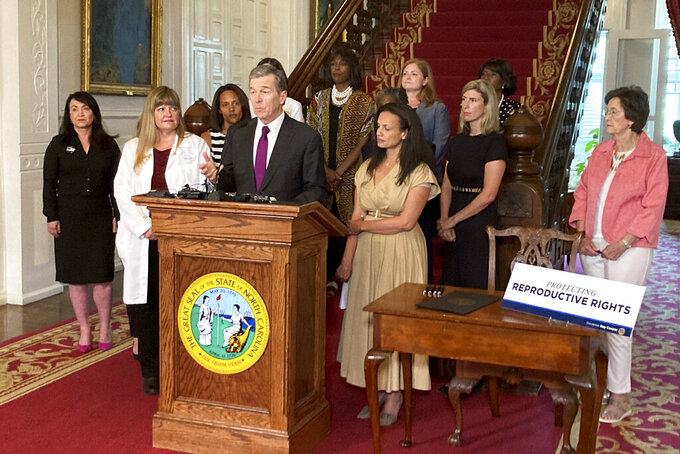 Gary D. Robertson, ASSOCIATED PRESS
North Carolina Democratic Gov. Roy Cooper speaks at the Executive Mansion in Raleigh, N.C. on Wednesday, July 6, 2022, before signing an executive order designed to protect abortion rights in the state. The order in part prevents the extradition of a woman who receives an abortion in North Carolina but may live in another state where the procedure is barred. (AP Photo/Gary D. Robertson)

RALEIGH, N.C. (AP) — Republican-backed adjustments to North Carolina's budget were signed into law by Democratic Gov. Roy Cooper on Monday, ensuring that state workers will get slightly larger pay raises and that construction projects and state reserves will receive billions of dollars more than initially planned.

The signing marks the second year in a row that Cooper has accepted the GOP's comprehensive state government spending plan after vetoing budget bills in 2017, 2018 and 2019. The measure alters the second year of the two-year budget bill that he signed last November.

Cooper said the measure included “critical investments in education, economic development, transportation and the state workforce.” Cooper also announced that North Carolina's COVID-19 state of emergency would expire Aug. 15 after almost 2 1/2 years because of budget language that gives flexibility to his health department to respond to the pandemic.

Cooper had until Monday night — 10 days after the House and Senate gave final legislative approval to their $27.9 billion plan — to sign the bill or veto it, or it otherwise would become law without his signature.

Absent from the enacted measure is any reference to Medicaid expansion, which has been intertwined with Cooper — a big expansion booster — and budget negotiations since 2019. The Republican-controlled House and Senate approved separate, competing measures in June that either accepted expansion or laid out a path to expansion, but no compromise was reached. But Cooper said advancements in Medicaid discussions contributed to his budget decision.

“Negotiations are occurring now and we are closer than ever to agreement on Medicaid expansion, therefore a veto of this budget would be counterproductive," Cooper added.

With more than 30 Democratic lawmakers ultimately voting for the agreement, Cooper also faced the pressure of a veto override vote by Republicans later this month that would be successful if as few as five Democrats stuck with them.

“We are pleased Gov. Cooper signed this responsible spending plan into law,” House Speaker Tim Moore and Senate leader Phil Berger said in a joint statement. “Moving forward, we are committed to working together to improve healthcare access and expand Medicaid, while providing the necessary safeguards to preserve the state’s fiscal strength.”

The measure, which covers the year starting July 1, decides what to do with well over $6 billion in additional revenue collections by mid-2023 above and beyond what had been anticipated when the two-year budget was drawn up.

There are no supplement tax cuts beyond the income tax rate reduction that the two-year budget law already directed occurred this year and next. Republicans portrayed the measure as designed to keep the state on firm financial footing amid inflation and worries about a recession.

Not counted among the $27.9 billion is another $7.7 billion in reserves and for items like state government construction and local water and wastewater projects, as well as economic incentives to attract more companies to the state. The state’s rainy-day reserve will grow to a record $4.75 billion and a new $1 billion "Stabilization and Inflation Reserve” is created that could be tapped to address eroding tax collections and rising prices.

The adjustments will increase next year’s 2.5% raise for rank-and-file state employees already in place to 3.5%, while average pay raises for teachers for the upcoming school year will grow from roughly 2.5% to 4.2%, with first-year teachers seeing $37,000 base salaries. Cooper's budget proposal from May had sought slightly higher pay raises for both teachers and workers.

The proposal spends $1 billion more on K-12 schools, community colleges and the University of North Carolina system compared to last year, or nearly $16.5 billion. Critics of Republican education policy say lawmakers have failed to comply fully with a judge-approved step-by-step plan to address state educational inequities. The state Supreme Court will hear arguments next month on whether courts can transfer money from state coffers to fulfill what is known as the Leandro decision.

The budget law also directs that $193 million in sales tax collections be used to help build transportation projects, rather than go into the state's general fund coffers. The portion of sales tax going to two highway funds would triple by mid-2024.