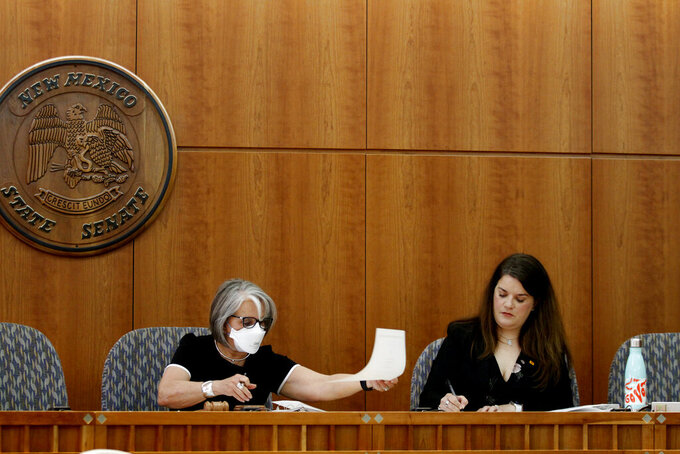 SANTA FE, N.M. (AP) — New Mexico’s state election board on Tuesday certified results of a primary that was nearly derailed by county officials amid voter anger and distrust fueled by unfounded conspiracies about vote-counting equipment and election procedures.

Secretary of State Maggie Toulouse Oliver and Gov. Michelle Lujan Grisham, both Democrats, voted together to endorse the election results as members of the state election canvassing board, at a sparsely attended meeting in the state Capitol. A third board member, state Supreme Court Chief Justice Shannon Bacon, had a scheduling conflict and was attending a retreat with chief judges and court executive officers.

Two of three county commissioners relented and certified the primary results under an order from the New Mexico Supreme Court and pushback from state election regulators and prosecutors.

Outbursts from angry crowds were on display in Torrance and Sandoval counties as local boards certified their local primary results. Those county commissions later approved resolutions that highlight dissatisfaction with election procedures.

Toulouse Oliver said an independent auditor reviewed the primary results with no findings of irregularities. Responding to anger that roiled the county election certification process, Toulouse said “we are just trying to be as transparent as possible about all the different checks and balances that go into ensuring an accurate, fair election.”

She urged people who are concerned about the way elections are run to learn more and volunteer to work as poll workers. She said her office is “strategizing currently about how do we better work with and educate county commissioners.”

“If you have concerns about the integrity of the election, put your money where your mouth is and go work the polls and be part of making sure the election is run legally and fairly,” she said.

At the same time, New Mexico's top election regulator said that the primary adhered to state and federal election law, and warned that a refusal by county boards to certify the election would disenfranchise voters.

“Had Otero County not certified, they would have just effectively flushed 7,300 votes down the drain for every candidate on the ballot that was entirely within that county,” said Toulouse Oliver, a Democrat who is running for reelection in November against Republican nominee Audrey Trujillo.

In the wake of the election standoff, Torrance County commissioners have approved a resolution that seeks to “verify and audit” the outcome of the primary election using a hand-tally method.

The all-Republican commission continues to raise concerns that the current criteria for certifying state-owned Dominion machines may be outdated. The machines also are tested locally prior to each election in view of the public to ensure they provide an accurate count.

Toulouse Oliver offered assurances that New Mexico is using the most current standards available in the U.S. for certifying vote-tallying machines and related computer coding. She said that state law allows for a discretionary recount with specific procedures.

Election experts say hand-counting of ballots is not only less accurate but extremely labor-intensive, potentially delaying results by weeks if not months in larger counties. They also say it’s unnecessary because voting equipment is tested before and after elections to ensure ballots are read and tallied correctly.

Automatic recounts have been ordered in six local election contests for judges, county commissioners and county assessor with narrow margins of victory.