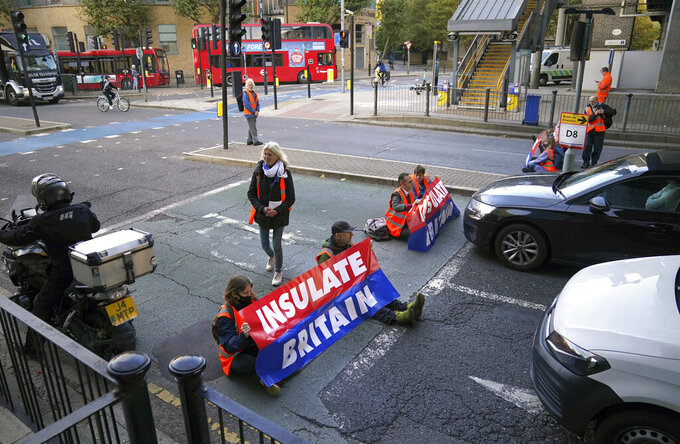 Victoria Jones, ASSOCIATED PRESS
Protesters from the Insulate Britain campaign block a road near Canary Wharf in east London, Monday, Oct. 25, 2021. Environmental protesters pressuring the British government to insulate all homes within a decade have resumed a road-blocking campaign in London ahead of the United Nations’ annual climate conference. (Victoria Jones/PA via AP)

LONDON (AP) — Environmental protesters pressuring the British government to insulate all homes within a decade resumed a road-blocking campaign in London on Monday ahead of the United Nations' annual climate conference.

As commuters headed to work, demonstrators from the Insulate Britain campaign obstructed a major artery into Canary Wharf, a major financial center in east London that is home to some of the world's biggest banks. Other roads into the British capital's traditional financial center, the City of London, which is a few miles west of Canary Wharf, were also blocked.

The Metropolitan Police force said 52 people were arrested in connection with Monday's protests, during which some demonstrators glued themselves to the roads.

On Oct. 14, Insulate Britain paused its organized blocking of many major roads that had caused traffic misery for drivers in and around London.

The group says it wants the country's Conservative government to insulate “all of Britain’s 29 million leaky homes by 2030, and all social housing by 2025,” a policy that it says will pay dividends in the urgent battle against climate change.

The resumption of the roadblocking campaign comes days before the start of the U.N. Climate Change Conference, known as COP26, in the Scottish city of Glasgow. Many environmentalists are calling the Oct. 31-Nov. 12 gathering the world’s last chance to turn the tide in the battle against climate change.

Tony Hill, 71, said he had traveled hundreds of miles from his home in northwest England to join Monday's protest in the City of London.

“I’m here today out of anger, fear and determination,” Hill said. “The anger that my government is failing the people of our country. The governments of the world are failing everyone. Everyone says we’re at the eleventh hour, but we’re at midnight, and nothing substantial is being done by our government and governments across the world.”