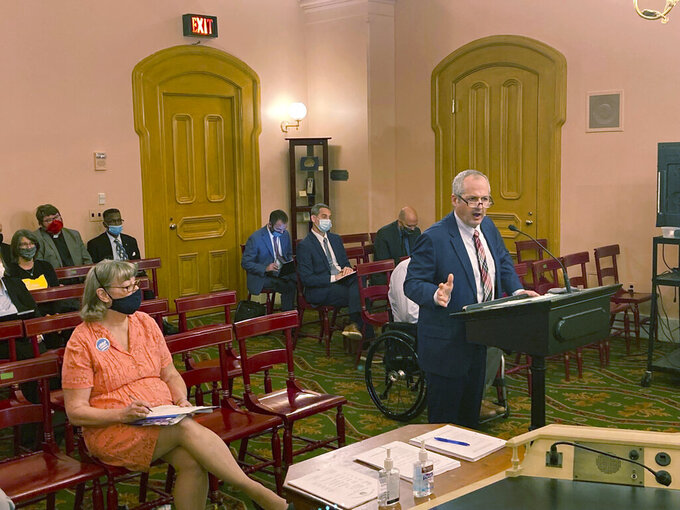 Andrew Welsh-Huggins, ASSOCIATED PRESS
In this Sept. 23, 2021 photo, Tim Young, Ohio's State Public Defender, testifies at the Ohio Statehouse in Columbus in favor of a bill that would abolish capital punishment in Ohio. Young also pushed for a measure that became law earlier this year, and which prohibits inmates from being executed if they suffered from a serious mental illness at the time of their crime, including schizophrenia, or bipolar disorder. (AP Photo/Andrew Welsh-Huggins)

COLUMBUS, Ohio (AP) — A new Ohio law prohibiting the execution of people who had severe mental illness at the time of their crime has begun seeing its first implementations.

Earlier this year, judges removed inmates in Butler and Franklin counties from death row after their attorneys successfully argued they met the mental illness criteria under the law.

And earlier this month, the law was invoked in a state Supreme Court decision upholding the death sentence of a man who killed four relatives in 2017, including an 8-year-old boy.

WHAT ARE THE LAW’S ORIGINS?

Whether mentally ill people should be eligible for death sentences has long been debated. Ohio law already required weighing whether a death sentence was appropriate if an offender, “because of a mental disease or defect, lacked substantial capacity to appreciate the criminality of the offender’s conduct,” at the time of the crime. That requirement was not a precursor to an automatic execution ban.

State law also allows for a “not guilty by reason of insanity” plea, though that is rarely invoked and difficult to prove.

Then, in 2014, an Ohio Supreme Court task force on the death penalty released a report with 56 recommendations for changing capital punishment in Ohio. Recommendation No. 8 outlined a ban on executions if offenders had specific mental illnesses at the time they committed their crimes.

“The ‘evolving standards of decency’ which prohibit the execution of juveniles and those with intellectual disabilities should prohibit execution of those with serious mental illness,” Lundberg Stratton testified before the Legislature in May 2019.

HOW HAS THE LAW BEEN USED TO DATE?

In June, a Franklin County judge threw out the death sentence imposed on David Braden, sentenced to die for the 1999 Columbus killings of his girlfriend, 44-year-old Denise Roberts, and her father, 83-year-old Ralph Heimlich. Braden's lawyers successfully argued he had paranoid schizophrenia with delusions.

The Death Penalty Information Center, a national clearinghouse on capital punishment that opposes the death penalty, says Braden was the first inmate nationally removed from death row by such a law. Ohio is the only active death penalty state with this law.

In a second Ohio case last month, a Butler County judge vacated the death sentence for Donald Ketterer, sentenced to die for the 2003 killing of 85-year-old Lawrence Sanders, his former boss. The judge said the evidence showed that Ketterer had bipolar disorder the day of the killing.

Then on Oct. 7, the state Supreme Court ruled 5-2 to uphold the death sentence for Arron Lawson for a 2017 quadruple slaying. Justice Sharon Kennedy, writing for the majority said his brutal killing of the four people, including an 8-year-old child, justified the death sentence and outweighed evidence presented on his behalf including a variety of mental health diagnoses. A three-judge panel sentenced Lawson to death in 2019.

At different times, Lawson, 27, was diagnosed with bipolar disorder, depression, and PTSD, and did not receive adequate treatment for those conditions, records show. As a result, Justice Michael Donnelly “reluctantly concurred” with upholding Lawson's death sentence. But he noted that Lawson has the ability to appeal under the new mental illness law.

A message was left with Lawson's attorney seeking comment.

WILL OTHER DEATH ROW INMATES INVOKE THE NEW LAW?

The legislation that took effect in April provides a one-year window for current death row inmates to file to have their death sentences revoked because of the serious mental illness clause. Inmates who successfully appeal their sentences are removed from death row but still face life in prison without parole.

Opponents of the law, including the Ohio Prosecuting Attorneys Association, argued that every death row inmate would file an appeal, further clogging up the courts.

“It also creates more uncertainty for the families of victims of Ohio's most heinous crimes and allows the offender yet another opportunity to cause victims' families more pain,” Vic Vigluicci, Portage County Prosecutor, testified in October 2019.

But Tim Young, the state public defender, said mass filings are unlikely. He noted in September 2019 testimony that only 9% of Ohio death row inmates pursued a claim when the U.S. Supreme Court ruled in 2002 that executing people with mental disabilities was unconstitutional. and only 4% — eight people — were successful.

Meanwhile, the future of executions in Ohio is uncertain. DeWine said last year that because of Ohio’s difficulty in finding drugs for executions, lethal injection is no longer an option, and lawmakers must choose a different method of capital punishment before any inmates can be put to death.

Pending bipartisan House and Senate bills would eliminate the death penalty and replace it with life without the possibility of parole.

The state’s last execution was July 18, 2018, when Ohio put to death Robert Van Hook for killing David Self in Cincinnati in 1985.

This story was first published on October 19, 2021. It was updated on October 21, 2021, to clarify that Ohio law already required weighing whether a death sentence was appropriate if an offender, “because of a mental disease or defect, lacked substantial capacity to appreciate the criminality of the offender’s conduct,” at the time of the crime. That requirement was not a precursor to an automatic execution ban.