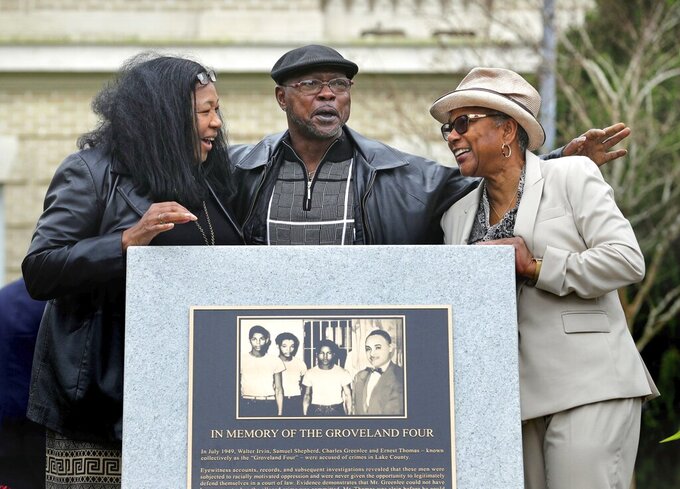 Joe Burbank, ASSOCIATED PRESS
Relatives of the Groveland Four, from left, Vivian Shepherd, niece of Sam Shepherd, Gerald Threat, nephew of Walter Irvin; Carol Greenlee, daughter of Charles Greenlee, gather at the just-unveiled monument in front of the Old Lake County courthouse in Tavares, Fla., Friday, Feb. 21, 2020. Saying they were denied fundamental rights, local prosecutor Bill Gladson has filed a motion to clear the names of the four men who were wrongly accused of raping a white woman more than seven decades ago in what is considered one of the greatest miscarriages of justice in Jim Crow-era Florida. Gladson filed a motion on Monday, Oct. 25, 2021 to dismiss the indictments of Ernest Thomas and Samuel Shepherd and to set aside the judgments and sentences of Charles Greenlee and Walter Irvin. (Joe Burbank/Orlando Sentinel via AP)

ORLANDO, Fla. (AP) — A local prosecutor has filed a motion to clear the names of four young African American men who were wrongly accused of raping a white woman more than seven decades ago in what is considered one of the greatest miscarriages of justice in Jim Crow-era Florida.

Prosecutor Bill Gladson filed a motion on Monday to dismiss the indictments of Ernest Thomas and Samuel Shepherd and to set aside the judgments and sentences of Charles Greenlee and Walter Irvin. The motion filed in state court in Ocala seeks to correct the record with new evidence in the case of the young men known as the “Groveland Four," Gladson said. It will be heard by an administrative judge.

“The evidence strongly suggests that a sheriff, a judge, and prosecutor all but guaranteed guilty verdicts in this case," Gladson said in his motion. “These officials, disguised as keepers of the peace and masquerading as ministers of justice, disregarded their oaths, and set in motion a series of events that forever destroyed these men, their families, and a community. I have not witnessed a more complete breakdown of the criminal justice system.”

The four Black men were accused of raping a white woman in the central Florida town of Groveland in 1949. During their ordeal, Thomas was shot and killed by a posse, and Shepherd was fatally shot by the local sheriff, Willis McCall. Irvin was shot and wounded by the sheriff and a deputy, and Greenlee was wrongly imprisoned. Future U.S. Supreme Court Justice Thurgood Marshall, then with the NAACP, represented Irvin during a second trial.

Both Greenlee and Irvin were eventually paroled after serving prison sentences. None of the men are still alive.

The Groveland Four’s story was recounted in the Pulitzer Prize-winning book, “Devil in the Grove" by Gilbert King, who was interviewed by the prosecutor as part of his review of the case.

The Florida Legislature in 2017 formally apologized for what happened, and Florida Gov. Ron DeSantis and the state’s three-member Cabinet granted posthumous pardons more than two years ago. In 2018, then-Florida Attorney General Pam Bondi directed the Florida Department of Law Enforcement to conduct a review of the case. Earlier this year, the state police agency referred the case to Gladson's office.

As part of his review of the case, Gladson and an investigator interviewed the grandson of Jesse Hunter, the now-deceased prosecutor of two of the Groveland Four defendants. According to the grandson, Broward Hunter, his grandfather and a judge in the case knew there was no rape.

The grandson also suggested to Gladson, based on letters he found in his grandfather's office in 1971, that Willis, the sheriff who shot two of the Groveland Four defendants, may have done it because of the sheriff's involvement in an illegal gambling operation. Shepherd was believed to be involved with the gambling operation too, and Willis might have seen a rape case as a “a way to get some people that were on his sh— list," Hunter told the prosecutor and investigator.

Gladson also said in his motion that James Yates, a deputy who served as a primary witness, likely fabricated evidence, including shoe casts.

The prosecutor also had Irvin's pants sent to a crime lab in September to test for semen, something that was never done at Irvin's trial, even though jurors were given the impression that the pants were stained. The results showed no evidence of semen, the motion said.

“The significance of this finding cannot be overstated," Gladson said in his motion.