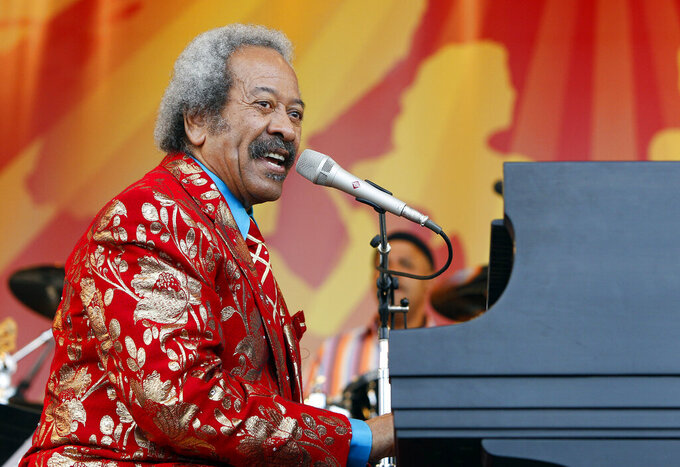 NEW ORLEANS (AP) — A member of the New Orleans city council is pushing to change a street currently named after Confederate Gen. Robert E. Lee and replace it with one the city's most famous musicians, Allen Toussaint, who died in 2015.

Councilmember Jared C. Brossett introduced an ordinance to rename the street that goes through the northern part of the city near Lake Pontchartrain after Toussaint. Toussaint was a songwriter, producer, pianist and performer whose decades-long career helped make such hits as “Working in the Coal Mine,” and ″Southern Nights."

“The City of New Orleans should prioritize celebrating our culture bearers, our diversity, and everything that makes our City special, not those who worked to tear us apart and represent a horrible history of racism that we are still dealing with today," said Brossett in a news release announcing the effort. "Allen Toussaint is a New Orleans native and world-renowned musician. He represents the very best of our city.”

Brossett sent a letter to the city's planning commission, which now has 60 days to hold a public hearing and then present a report before the matter goes to the full council, according to the press release.

Like other cities and towns around the country and especially the South, residents and officials in New Orleans have worked to remove old vestiges of the Confederacy and the Jim Crow era when Black residents were forced to endure racial segregation. The city has removed a number of prominent monuments honoring Confederate figures including a statue of Lee that stood in a prominent traffic circle. Lee, a leading Confederate general, surrendered to Union Gen. Ulysses S. Grant at Appomattox Court House in Virginia on April 9, 1865.

A committee appointed in 2020 was tasked with identifying streets, parks and places in the city memorializing white supremacy and recommending new names for them. One of the 37 places the report identified was Robert E. Lee Boulevard, which the authors recommended renaming in honor of Toussaint.

“Toussaint was a beloved and internationally-acclaimed New Orleans songwriter, producer and musician who was instrumental in shaping the sound of modern New Orleans music," the report read.