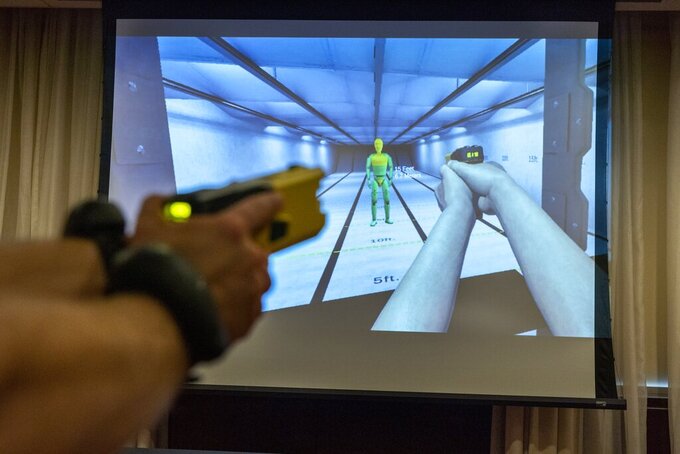 Jacquelyn Martin, ASSOCIATED PRESS
VR equipment and a version of the TASER 7 that utilizes VR technology for training, is demonstrated, Thursday, May 12, 2022, in Washington. (AP Photo/Jacquelyn Martin)

WASHINGTON (AP) — A combative man approaches, moving quickly toward a police officer who pulls out a Taser. The man is wearing a heavy jacket, which could mean the prongs that would generate an electronic current and send him to the ground might not work.

It’s a scenario that’s played out over and over for police officers across the U.S., sometimes with fatal consequences. The scenario was highlighted recently with the police shooting death of Patrick Lyoya, who was shot in the back of the head by an officer in Grand Rapids, Michigan, during a struggle after the officer tried to fire his Taser twice at Lyoya. Both times it was ineffective. Had it been effective it's possible the incident would have ended then.

Axon, the company that is best known for developing the Taser, is expanding a virtual reality and immersive training program that is aimed at increasing training for officers with Tasers in life-like scenarios and making them comfortable with split second decisions, including where to fire the weapon’s prongs to incapacitate a suspect without needing to turn to deadly force.

Axon has grown to become one of the largest technology companies for police agencies in the U.S. and supplies departments large and small – including a majority of the largest forces in the nation – with Tasers and body cameras. The new training, being formally rolled out Tuesday, is the latest in the company’s virtual reality programs and is coupled with other real-life training simulations, including responding to calls with people with Autism and domestic violence calls.

The virtual reality training, which uses headsets, wrist controllers, and an officer’s actual Taser with a special virtual reality cartridge, is assembled in a small duffel bag, giving police departments the ability to implement the training during roll calls or for officers at a police station, between calls. It also means officers can go through training all the time, instead of being called out to a training center or a police academy.

“The level of repetition and really kind of training for things that are more realistic, that they don’t necessarily have time or resources for, it just enables them to do that in a much better way, a more immersive way,” said Chris Chin, the vice president of immersive technologies at Axon.

The portable setup and constant access have been lauded by departments that have been piloting the program. For many police departments, training simulators have proved costly and required two-dimension displays being built in a police academy or other building. With Axon’s new equipment, an officer only needs a few feet around them and the program can be done remotely, with a trainer at another location or working from home.

The training also offers the officers the ability to train at a virtual firing range, in addition to the three-dimensional room where multiple suspects approach. The training is aimed at having officers quickly identify when and how to fire their weapon – including whether to use a closer or wider spread for the prongs and wires that carry the electrical current to override the person’s central nervous system and temporarily incapacitate them.

The training program will be expanded, and Axon has already started creating another scenario that incorporates the Taser training in a scenario of a call for domestic abuse.

“We want to actually have something that’s very fluidly deployable, mobile, and can be kind of thrown in the back of a vehicle, can be done before roll call or after roll call,” Chin said. “It can be done in a way where you can actually have trainers and trainees in different locations.”

In New Castle, Delaware, nearly every police officer has gone through Axon’s community training programs and the department is expanding with the new Taser training program.

The virtual reality simulations now mean officers in the force of about 350 can train during every shift, including overnight, said Master Corporal Michel Eckerd.

“We’re always doing new and innovative things,” Eckerd said. “The big thing with this is the convenience and the portability.”

Axon already offers police departments virtual reality community engagement training, which were developed with the help of mental health experts, community advocates and other experts, and are designed to put officers in real-life scenarios to de-escalate a situation and deal with victims or suspects during a call. The company partnered with Phoenix police to put officers through nine training modules. A report from the National League of Cities found that more than 80% of officers who went through the training said it had prepared them to adapt their approach to a related call and nearly 60% said the training encouraged them to see a situation from another perspective.

Gallego also highlighted the portability as a major benefit in a city like Phoenix, where going to the police academy could mean a nearly one-hour ride for an officer. With the virtual reality headsets, officers could just train in their precincts and wouldn’t need to be pulled away from patrol for a full day.

“The more we can have tools that are nimble and allow us flexible training, the less time we take officers off the streets and the more we can get real results,” she said.