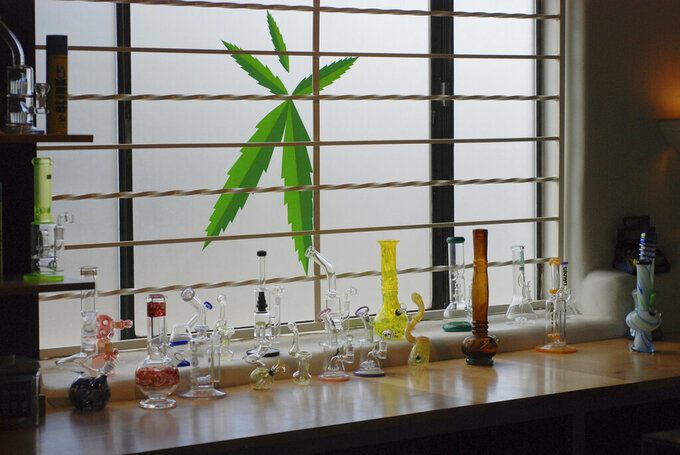 Morgan Lee, ASSOCIATED PRESS
FILE - In this June 11, 2019, file photo, marijuana equipment lines a window at the Minerva medical cannabis dispensary in Santa Fe, N.M. New Mexico Gov. Michelle Lujan Grisham is set to sign legislation that will legalize recreational marijuana use and sales in the state. The Democratic governor has scheduled a signing ceremony and a news conference for Monday, April 12, 2021. (AP Photo/Morgan Lee, File)

Medical marijuana business last month voiced concerns about a potential run on pot supplies and shortages during the transition to a legal recreational market if authorities don't move soon to lift a limit on the number of marijuana plants that each business can grow.

On Wednesday, State Heath Secretary Tracie Collins and Regulation and Licensing Superintendent Linda Trujillo voiced disagreement with warnings about an imminent marijuana shortage. They acknowledge that possession of up to 2 ounces (56 grams) of marijuana becomes legal on June 29 — but note that recreational marijuana sales won't kick off until later. The deadline for initiating those sales is April 1, 2021, and potentially earlier.

The letter also indicates that medical cannabis patients won't be shielded completely from current sales and future marijuana excise taxes, which will be levied on purchases in excess of the 90-day, 8 ounce (225 gram) supply limit for individual patients.

More than 115,000 people in a state of 2.1 million have enrolled in the New Mexico's medical marijuana program under qualifying conditions ranging from cancer to post-traumatic stress.

“To the extent that a qualified patient’s purchases exceed the rolling 90-day adequate supply limit, those additional, ‘commercial cannabis’ purchases will not be deemed exempt from the cannabis excise tax or gross receipts tax,” the letter states.

“Imagine that these enrollees are facing a 20% tax rate when in fact they were expecting to see more generous purchase limits and no tax applied at all,” Rodriguez said. “So the letter was a bit of a shock.”

The state's newly enacted Cannabis Regulation Act leaves many decisions about recreational marijuana oversight, including initial caps on cultivation, to the Regulation and Licensing Department and its rulemaking process that involves public comment.

“Rulemaking will include revisions to existing producer plant limits, although the content of the proposed rules has not yet been determined," the letter from regulators states. “The proposed rules will be made available to the public in late May, and a public hearing will be scheduled to occur on June 29, 2021, or shortly thereafter.”

Sponsors of recent marijuana reforms sought to do away with gross receipts taxes on medical cannabis sales that added roughly 5% and 9% to transactions, replicating exemptions for other medication.

The reforms place an additional 12% excise tax on recreational marijuana.