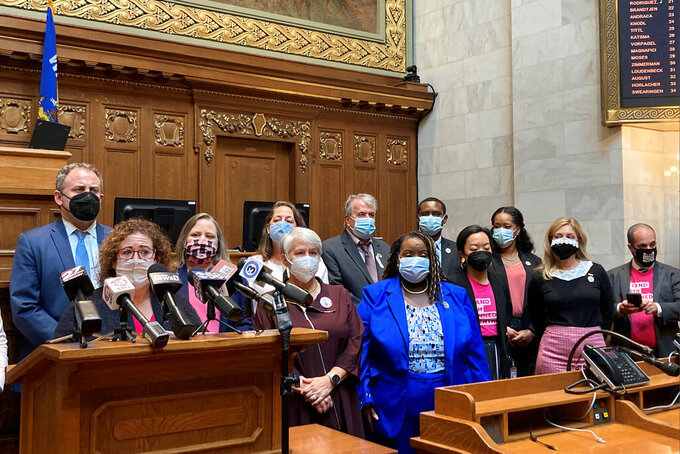 MADISON, Wis. (AP) — The Republican-controlled Wisconsin Assembly gave final approval Wednesday to a package of anti-abortion bills, many of which Democratic Gov. Tony Evers vetoed two years ago and is all but certain to reject again.

Republicans do not have enough votes in the Legislature to override an Evers veto. Republicans said they were trying again because the measures are a priority and there's a chance Evers will change his mind. Democrats, who all voted against the bills, accused Republicans of only taking up the bills to energize conservatives ahead of the 2022 midterm election.

“This is a political game being played by Republicans to gin up their base," Democratic Rep. Lisa Subeck, of Madison, said prior to debate. “This is nothing but theater. They know that these bills will not become law.”

Republican Assembly Speaker Robin Vos defended bringing the bills up for a vote, saying “our caucus is proud to be pro life. These bills should be bipartisan.”

Evers is up for reelection next year, as is everyone in the Assembly and half of the state Senate. Evers did not immediately return a message asking if he would veto the measures.

One bill, which Evers vetoed in 2019, would impose criminal penalties on doctors who fail to give medical care in the extremely rare circumstance in which a baby is born alive following an abortion attempt. Violators would be guilty of a felony punishable by up to six years in prison.

The bill also would make intentionally causing the death of a child born alive as a result of an abortion a felony punishable by life in prison.

Doctors insist the bill is a solution in search of a problem. They and other opponents say babies are almost never born alive during failed abortion attempts and in the rare instances in which they are, doctors are already ethically and legally bound to try and keep them alive.

The bill’s supporters say the measure would remove any gray areas in the law.

“This is not an anti-abortion bill,” said bill sponsor Republican Majority Leader Jim Steineke. “This is simply a bill that's simply about protecting the lives of children that survive an abortion attempt.”

That one and the other abortion bills show that Republicans care more about the 2022 elections than they do women's health, said Democratic Assembly Minority Leader Gordon Hintz.

A second bill would require doctors to provide the parents of fetuses and embryos that test positive for a congenital condition information about the condition. A third proposal would prohibit abortions based on a fetus' sex, race or national origin. Evers vetoed that measure in 2019.

Another measure would reduce funding for abortion providers by prohibiting the state from certifying them as a provider under Medicaid. There would be exceptions in cases of sexual assault or incest or if the woman’s life is in danger.

A fifth bill would require doctors to tell any woman seeking a medication-induced abortion that she could still change her mind after ingesting the first dose and could still continue the pregnancy.

The claim that a medicine-induced abortion can be reversed has been criticized by the American College of Obstetricians and Gynecologists and American Medical Association as not based in science and potentially threatening to the patient's life. Evers vetoed such a bill two years ago.

The bills come as abortion rights supporters are concerned that the U.S. Supreme Court could overturn its 1973 Roe v. Wade decision that essentially legalized abortion nationwide before a fetus can survive outside the womb, which is generally around the 24th week of a pregnancy. A Wisconsin law enacted in 1849 made abortion illegal, but it has been unenforceable since the Roe v. Wade decision. That ban would take effect again if Roe v. Wade is overturned.