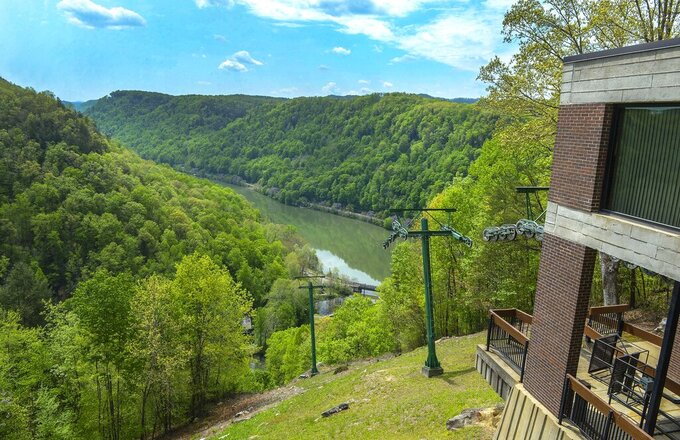 CHARLESTON, W.Va. (AP) — After more than a half-century of carrying visitors on scenic round-trip journeys to the depths of two river gorges, the aerial tramways serving Hawks Nest and Pipestem Resort state parks soon will be replaced.

West Virginia State Parks officials are hopeful new, improved aerial tramways will be operating at the two parks next year.

The Hawks Nest aerial tramway has been closed since June 6, when a routine morning inspection by the state park’s staff turned up a safety issue that required substantial remediation.

“Since then, we’ve shuttled 7,600 people down to the marina to ride the jet boat,” said Joe Baughman, the park’s superintendent.

The shuttle involves a van trip from Hawks Nest’s lodge to Ansted, about a mile to the east, followed by a four-mile descent to Hawks Nest Lake on Mill Creek Road.

The Hawks Nest tramway, which opened in 1970, typically carries more than 45,000 visitors annually on steep, 800-foot descents from the lodge to a marina on Hawks Nest Lake at the base of the New River Gorge. There, visitors can board a park concessionaire’s jetboat to ride to the base of the New River Gorge Bridge, rent kayaks or paddleboards or set up camp at one of the park’s four rental glamping sites and return to the canyon rim via a three-minute tramway trip.

The aerial tramway at Pipestem, which began operating in 1972, carries visitors nearly two-thirds of a mile, descending from the rim of Bluestone Canyon and crossing the Bluestone River before arriving at Mountain Creek Lodge. The trip involves an 1,100-foot drop in elevation and six minutes of sightseeing time. The tramway provides the only visitor access to Mountain Creek Lodge’s restaurant and 30 guest rooms.

Pipestem’s tramway will open for the season, according to state park officials, and will continue to operate through at least some of the construction activity for the new tramway. Tramway Sweets and Treats ice cream shop and the Canyon Rim Gift Shop also will be open at the upper tramway station.

“The Pipestem tramway is definitely a focal point of the park and a sought-after activity for visitors,” said state Commerce Department spokesman Andy Malinosky. “With that being said, it is our hope that the Pipestem tram will reopen in 2023.

Baughman said he was hopeful the new tramway at Hawks Nest would be operating by this time next year. “To our visitors, the tramway is synonymous with Hawks Nest,” he said.

Design specifications for the new state park tramways call for their gondola-topped passenger cars to seat up to eight passengers, doubling current capacity, and include open freight cars for carrying kayaks, bicycles and other gear into and out of the two river canyons.

The Hawks Nest tram was one of only two reversible tramways built by the Hall Ski-Lift Co., according to the Chairlift Preservation Society. The other Hall tramway, built at Waterway Hills Golf Course in Myrtle Beach, South Carolina, closed in 2015.

Pipestem’s tram was one of four similar tramways installed in North America by the Gerhard Mueller Co. of Zurich, Switzerland. The others, serving ski areas at Mount St. Anne, Quebec; Whistler, British Columbia; and Mount Whittier, New Hampshire, all have ceased operating.