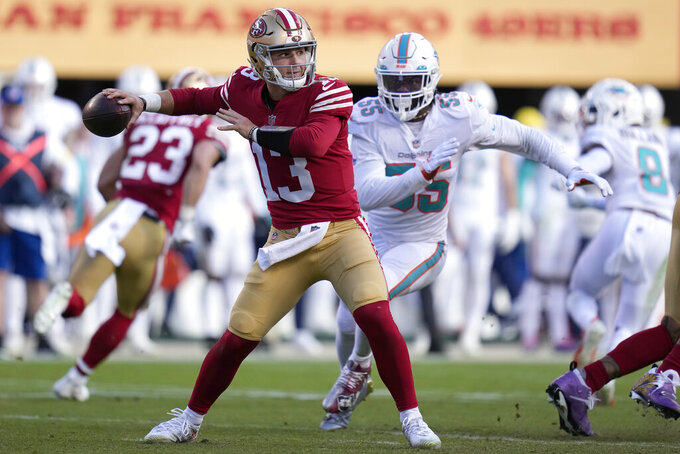 TURNOVER DIFFERENTIAL: Buccaneers even; 49ers plus-4.

BUCCANEERS PLAYER TO WATCH: WR Chris Godwin continues to make strides in his comeback from a serious knee injury suffered last December. Since Week 4, he has 65 receptions — third most in the NFL over that stretch. Godwin has six or more catches in nine consecutive games. That’s the longest such streak in the league this season and a Bucs franchise record. The sixth-year pro was targeted 13 times against New Orleans last Monday, finishing with eight receptions for 63 yards.

49ERS PLAYER TO WATCH: Rookie QB Brock Purdy is set to make his first career start after Jimmy Garoppolo broke his left foot last week. Purdy went 25 for 37 for 210 yards, two TDs and an INT in relief last week. Purdy, who was the last pick in the NFL draft in April, is trying to become the first Niners rookie QB to win his first career start since Jim Druckenmiller in 1997.

KEY MATCHUP: Bucs tackles vs. 49ers DE Nick Bosa. Bosa leads the NFL with 14 1/2 sacks after getting three last week and will be a tough test for Bucs LT Donovan Smith and backup RT Josh Wells, who is filling in for the injured Tristan Wirfs. Bosa has at least one sack in 10 of the 11 games he has played this season. His six-game sack streak is one shy of the franchise record.

KEY INJURIES: The Bucs faced the Saints without Wirfs (high ankle sprain), as well as three starters on defense — CB Sean Murphy-Bunting (quadriceps), S Antoine Winfield Jr. (ankle) and S Mike Edwards (hamstring). Wirfs is not expected to play Sunday. The others could be game-day decisions. ... Niners RB Christian McCaffrey (knee) and Bosa (hamstring) are nursing injuries but are expected to play. ... DT Hassan Ridgeway (pectoral) will be out this week.

SERIES NOTES: The Bucs are playing their second road game against the Niners in the past 11 seasons, having won their only previous trip to Levi's Stadium in 2016. ... The teams have split their past 12 meetings after San Francisco won 12 of the first 13.

STATS AND STUFF: Bucs QB Tom Brady leads the NFC in passing with 3,332 yards. The seven-time Super Bowl champion has thrown for 16 TDs vs. three interceptions and has the NFL’s second-best touchdown-to-interception ratio of 5.33 behind Jalen Hurts’ 6.67. ... In three starts against the 49ers, Brady is 2-1 and has thrown 949 yards and seven touchdowns, including four TDs without an interception for New England in 2016 — the only other time he’s faced San Francisco on the road. ... RB Rachaad White scored on a 6-yard reception with 3 seconds remaining to beat the Saints last Monday night. He leads all rookie RBs with 35 receptions and 221 yards receiving. ... TE Cade Otton also caught a TD pass as the Bucs overcame a 13-point deficit in the final five minutes. He ranks first among rookie tight ends in receptions (32) and second in yards receiving (309). ... The Bucs have allowed 18.3 points per game, fifth lowest in the league. They’re also fourth in sacks with 38, seventh in pass defense and eighth in total defense. ... San Francisco has won five straight games for the first time since an 8-0 start in 2019. ... The Niners have allowed 17 points or fewer in five straight games for the first time in a single season since 1992. ... The 49ers have outscored the opposition 73-7 in the second half in the past five games .... San Francisco had three sacks and three INTs last week for the first time in a game since 2019. ... Niners RB Christian McCaffrey is the only player in NFL with at least 700 yards rushing and 500 yards receiving this season. ... San Francisco LB Fred Warner leads all linebackers with 10 passes defensed. ... Niners rookie RB Jordan Mason had a career-high 51 yards rushing last week. ... San Francisco K Robbie Gould scored 15 points last week to move into 10th place all time with 1,919.

FANTASY TIP: McCaffrey had 66 yards rushing and 80 yards receiving last week, becoming the first Niners player to lead in both categories in a game since 2020. McCaffrey is averaging 104.6 yards from scrimmage the past five games with two TD catches, two TD runs and a TD pass.