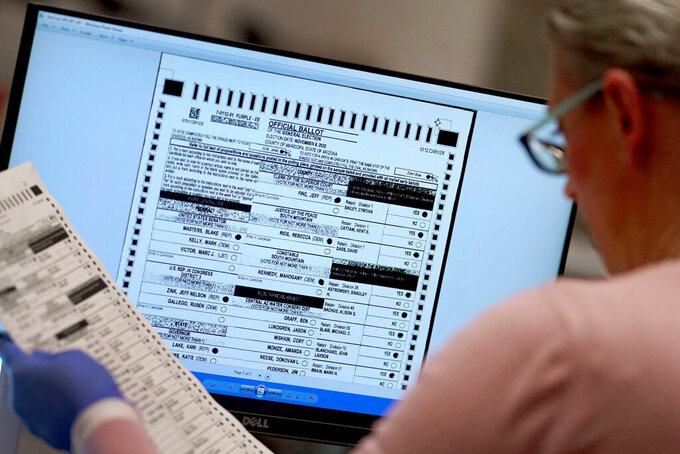 Arizona remained the epicenter for post-Election Day misinformation Thursday as vote counting in that state continued.

Many of the misleading claims circulating two days after the election focused on printing problems that prevented vote counters from reading some ballots. The mishap spawned conspiracy theories about vote rigging that spread despite despite explanations from local officials and assurances that all votes would be counted.

The rumors spread in part because people had legitimate questions about problems at the polls, said University of Washington professor Kate Starbird, a leading misinformation expert and part of the Election Integrity Partnership, a nonpartisan research group.

“The problem is when their audiences pick that up with this assumed voter fraud implication,” Starbird said. “It gets picked up and reframed as voter fraud as it spreads.”

Hoaxes in other states added to the misinformation swirling on the internet after the election. In some cases, it was amplified by candidates and far-right groups trying to explain away losses.

One video aired on Fox News showed a Wisconsin poll worker initialing ballots before they were given to voters. It's normal procedure on Election Day.

But on Tuesday someone posted the clip to social media and claimed instead that it showed a Philadelphia election worker doctoring ballots.

“Masked man cheating in front of the cameras on the mainstream media,” read one post containing the clip, which directed users to repost it. “Spread to normies.”

Much of the misinformation in Pennsylvania since the election have focused on misleading explanations for the time it takes to count votes.

The U.S. has a long history of political races that weren't settled on Election Day, and those occasional delays have only increased in recent years given the rising popularity of voting by mail. In key battleground states like Pennsylvania, Michigan and Arizona, election officials cannot begin counting mail ballots until Election Day, guaranteeing delays.

In the weeks before Nov. 8, election officials, voting advocates and misinformation researchers closely monitored social media content, given the role that false claims about voter fraud played in the deadly Jan. 6, 2021, attack on the U.S. Capitol.

Misinformation about elections has also been blamed for deepening political divides and even an increased threat of political violence.

In some cases, conspiracy theories about election fraud prompted threats of violence against officials on Election Day, particularly on fringe platforms and websites popular with far-right groups. But in general, the day came and went with few major problems reported.

Arizona and Pennsylvania both featured prominently in election conspiracy theories in 2020 and again this year, thanks in part to GOP gubernatorial candidates who had both advanced baseless claims about the last election.

Misinformation about voting can undermine public trust in elections while giving candidates who spread such claims a convenient explanation when they are defeated, said Bret Schafer, a senior fellow at the Alliance for Securing Democracy, a Washington, D.C.-based nonpartisan organization that tracks misinformation.

“If they lose, that just reaffirms beliefs that the whole thing is rigged,” he said. “And if they win, you have people running elections who have pretty wild thoughts about how elections should be run.”

It will take weeks to gauge the the full impact of misinformation on Election Day. Starbird said early assessments suggest there was somewhat less overall online engagement with viral, misleading content about elections and voting than two years ago.

"Which is a little bit of a relief,” she added.