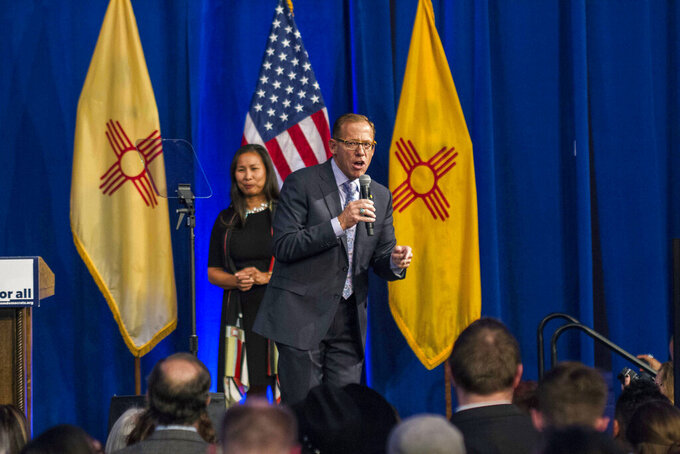 The Democrat wants to follow in the footsteps of friend Hector Balderas, who is wrapping up his second term as New Mexico's top prosecutor and consumer advocate. Balderas also served as state auditor before being elected attorney general and the two previously worked for the same law firm.

Colón, 51, is the first person to enter the race for the open seat that has been dominated by Democrats for the better part of a century. Republicans have held the office only three times in the state's nearly 110-year history.

Colón sees the campaign as an opportunity to “take the next step,” saying his motivation is rooted in his experience growing up in New Mexico and his desire to serve his community. He recalled the struggle of being poor and as a teenager having to take on the role of caring for his mother and siblings when his father died at a young age.

He described himself as a fighter, saying he wants to protect New Mexico families and that public safety will be among his top priorities.

“We can’t have prosperous communities until we have safe communities. We are limiting our potential in New Mexico," he said in an interview with The Associated Press. “We’ve enjoyed some great success but I’m convinced that success has still been limited. I want to make sure that New Mexico is known as a place where consumer protection is important and that public safety is No. 1.”

A former chairman of the New Mexico Democratic Party, Colón won the race for auditor in 2019, ending a political drought for him. Campaigns for lieutenant governor in 2010 and for Albuquerque mayor in 2017 were unsuccessful.

As auditor, Colón has been in charge of ensuring that the finances of government agencies, school districts, universities and other public organizations that receive tax dollars are examined annually. That work is often done by independent auditors overseen by the state auditor.

The office also promotes transparency and conducts special investigations. Its mantra has been to stamp out fraud, waste and abuse.

The office has been involved in the state's overhaul of its guardianship and conservator program, investigated management issues at hospital in McKinley County at the height of the pandemic and reviewed claims of alleged financial wrongdoing at Spaceport America.

Colón said he believes his work as an attorney over two decades and his time at the auditor's office have prepared him for the kind of work done by the attorney general's office.

That will include consumer protections as the state moves forward with its energy transition plans, a lawsuit against the federal government over contamination at military bases and the battle before the U.S. Supreme Court with Texas over management of the Rio Grande.

Colón acknowledged that water resources are shrinking across the arid West and that the best option would be to work with others to come up with a strong water-sharing plan rather than spending more money on litigation. Still, he said if agreements can't be reached, he will fight for New Mexico's interests.

He said his overall mission would be giving people access to justice.

“There are 2.1 million New Mexicans who deserve to have faith in their community and the idea that they can raise their families in a safe space,” he said, “but so many families are suffering and they’re scared and they need a fighter and I’m that guy.”

Colón earned an undergraduate degree in finance from New Mexico State University in Las Cruces and graduated from law school at the University of New Mexico.

This version corrects that Colón and Balderas worked at the same law firm but did not at the same time.