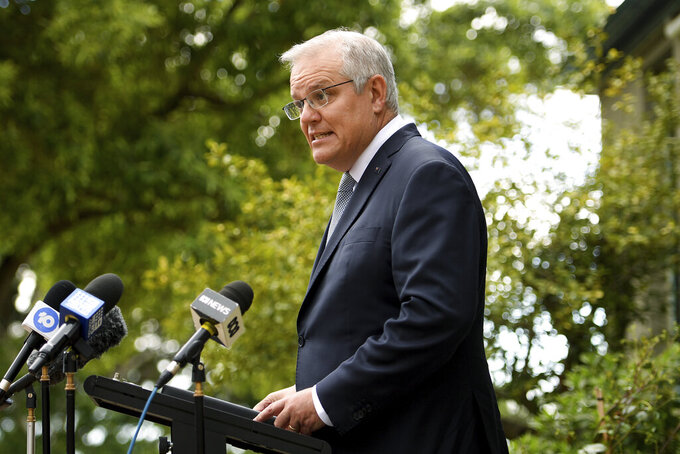 Dan Himbrechts, ASSOCIATED PRESS
Australia's Prime Minister Scott Morrison speaks during a press conference in Sydney, Friday, Oct. 15, 2021. Morrison confirmed he will attend a climate summit in Glasgow next month while his government remains bitterly divided over a draft plan for the country to achieve net zero emissions by 2050. (Dan Himbrechts/AAP Image via AP)

CANBERRA, Australia (AP) — Australia’s prime minister confirmed on Friday he will attend a climate summit in Glasgow next month despite his government remaining bitterly divided over a draft plan for the country to achieve net zero emissions by 2050.

Prime Minister Scott Morrison said his government’s next climate plan would protect the interests of “rural and regional” Australians who complain that they have borne the brunt of previous reforms.

"What’s important is that Australia’s economy goes from strength to strength," he added.

The conservative government aims to reduce Australia's emissions to net-zero and preferably by 2050, but hasn’t committed to that target.

Australia has not budged from its 2015 pledge at the Paris climate conference to reduce emissions by 26% to 28% below 2005 levels by 2030 ahead of climate talks in Glasgow, despite many countries adopting far more ambitious targets.

The major obstacle to tougher action on climate change in Australia is the government’s rural-based junior coalition partner, the Nationals party.

Australia achieved its reduction goals under the former Kyoto Protocol in the late 1990s through restrictions on land clearing which the Nationals complain placed an unfair financial burden on farmers.

Morrison’s Cabinet considered new greenhouse gas reduction measures at a meeting on Wednesday. But a majority of Nationals lawmakers will need to approve that plan at a crucial meeting on Sunday.

Deputy Prime Minister Barnaby Joyce, who leads the Nationals, said his colleagues would approach a net zero target with caution.

Joyce said Australia's rural regions had been “swindled” under the Kyoto Protocol.

“If what is asked once more is for the regional areas to fulfill capital city climate policy prerogatives, to feel good about a sacrifice they didn’t actually make, then what other option do we have than extreme caution wrapped in cynicism,” Joyce posted on social media.

Reducing emissions is a politically fraught issue in Australia, which is one of the world’s largest exporters of coal and liquified natural gas. The nation is also one of the world’s worst greenhouse gas emitters per capita because of its heavy reliance on coal-fired power.

The government’s lack of ambition on climate change is regarded as a reason behind the government’s surprise re-election in 2019 and strong voter support in coal-rich Queensland state.

Morrison had argued that the opposition’s pledge to reduce Australia’s greenhouse gas emissions by 45% below 2005 levels by 2030 and achieve zero emissions by 2050 would wreck the economy.

Morrison had put his indecision about going to Glasgow down to his reluctance to spend another two weeks in quarantine when he returns. But some observers suspect he didn't want to be berated in person over weak Australian targets but was now becoming more confident of getting his government to agree to internationally more acceptable goals.