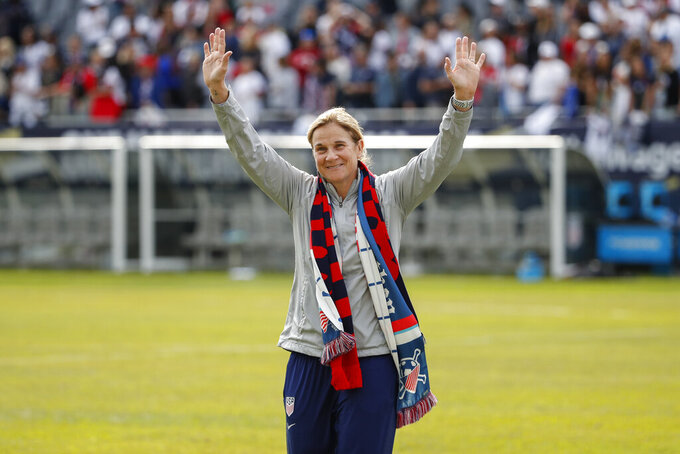 Kamil Krzaczynski, ASSOCIATED PRESS
FILE - United States head coach Jill Ellis waves to the crowd as she leaves the field after an international friendly soccer match between the United States and South Korea, Sunday, Oct. 6, 2019, in Chicago. Jill Ellis was voted into the U.S. Soccer Hall of Fame after coaching the American women to World Cup titles in 2015 and 2019. (AP Photo/Kamil Krzaczynski, File)

FRISCO, Texas (AP) — Jill Ellis was voted into the U.S. Soccer Hall of Fame after coaching the American women to World Cup titles in 2015 and 2019.

The 56-year-old British-born coach was picked on 20 of 24 ballots in the builder voting that included only coach candidates for the 2023 class.

Clive Charles, a former U.S. under-23 and under-20 coach, national team assistant and University of Portland men’s and women’s coach, was second with 12 votes and didn't make the hall in totals announced Wednesday.

Ellis, FIFA’s women’s coach of the year in 2015 and 2019, is president of the National Women’s Soccer League’s San Diego Wave.

She will be inducted next year along with DaMarcus Beasley, Landon Donovan and Lauren Cheney Holiday.