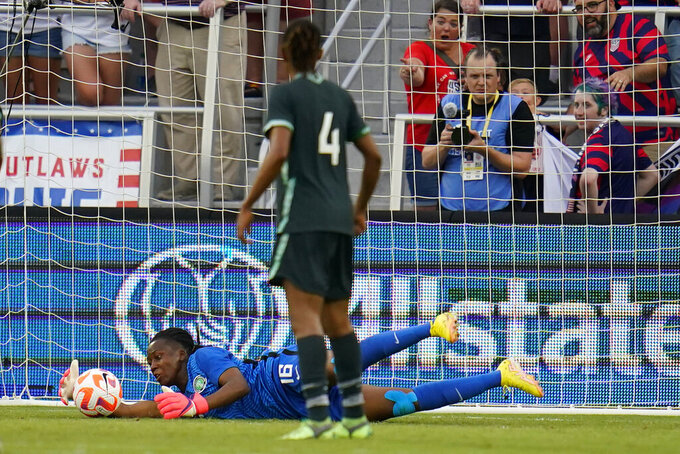 Julio Cortez, ASSOCIATED PRESS
Nigeria goalkeeper Chiamaka Nnadozie, bottom, makes a save in front of teammate Glory Ogbonna during the first half of the team's international friendly soccer match against the United States, Tuesday, Sept. 6, 2022, in Washington. (AP Photo/Julio Cortez)

The United States also benefitted from an own goal to extend the team's unbeaten streak on American soil to 71 games.

The teams first met on Saturday in Kansas City, Kansas, and the United States came away with a 4-0 victory. Nigeria was missing six starters because of injuries and visa issues.

The own goal gave the United States an early lead in the 24th minute, but Nigeria equalized on Uchenna Kanu's score after the break.

It was the first goal that the United States has given up this year. The goal also snapped a nine-game shutout streak for the Americans.

The United States pulled back in front with Lavelle's header off a cross from Megan Rapinoe in the 66th minute. It was Lavelle's fourth goal of the year.

Rapinoe came in as a second-half substitute and was on the field for just 73 seconds before her key assist.

“I will start first with with Pinoe’s first touch and cross. I thought that was world class. But I still don’t know how Rose managed to get her head on the ball. It was absolutely incredible," coach Vlatko Andonovski said.

Both teams are preparing for the 2023 Women's World Cup, co-hosted by Australia and New Zealand.

The United States qualified for the World Cup at the CONCACAF W Championship in July. The team won the tournament title to also secure a berth in the 2024 Olympics.

The U.S. has won the last two World Cups and has four titles overall.

Nigeria, one of the most successful women’s teams in Africa, qualified for the 2023 World Cup by advancing to the semifinals of the Africa Cup of Nations in July. The Super Falcons finished fourth in the tournament.

Nigeria has advanced to every World Cup since the tournament started in 1991. Currently, the team is coached by Randy Waldrum, former coach of the NWSL’s Houston Dash.

“I’m very proud of the team and how they handled it, because I do know that there will be moments like this when it matters, and the fact that they figured out a way to get a goal and win the game is very good for us," Andonovski said about the friendly match. “But we did learn a big lesson, that when we create opportunities early, we need to put them away because otherwise, we can we can go through the moments like we did in the second half.”

The United States heads to Europe for its next match against England at Wembley Stadium on Oct. 7.

Following the match, the U.S. women and representatives for their male counterparts formally signed the collective bargaining agreements struck in May with U.S. Soccer that gives players on both sides equal pay.