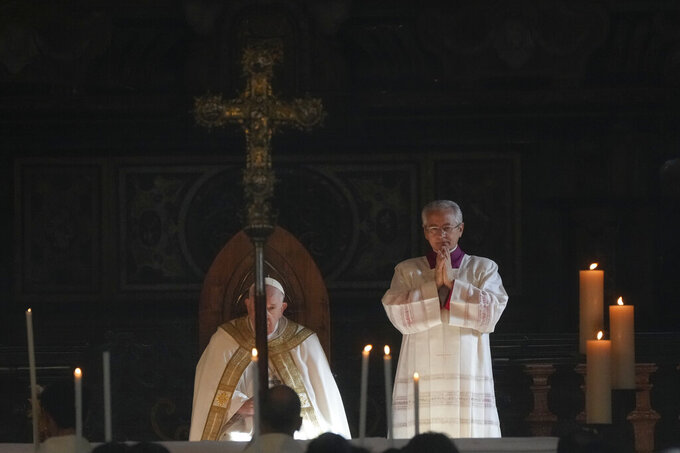 Gregorio Borgia, ASSOCIATED PRESS
Pope Francis celebrates the holy mass in the Cathedral of Asti, northern Italy, Sunday, Nov. 20, 2022. The Pontiff returned to his father's birthplace in northern Italy on Saturday for the first time since ascending the papacy to celebrate the 90th birthday of a second cousin who long knew him as simply "Giorgio." (AP Photo/Gregorio Borgia) 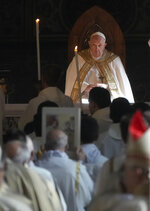 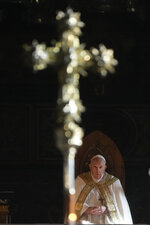 ASTI, Italy (AP) — Pope Francis honored his northern Italian roots on Sunday by celebrating a special Mass in his father’s hometown and encouraging younger generations to not be indifferent to the poverty and misery all around them.

Thousands of people turned out to greet Francis during his rare personal weekend getaway to the province of Asti, near Turin, and he returned the favor by taking a long popemobile ride around town.

On Saturday, he made a private visit to relatives who still live in the area and celebrated the 90th birthday of his second cousin. On Sunday, he was given the honorary citizenship of Asti and celebrated Mass in the city’s cathedral, where he assumed the role of a local parish priest ministering to his flock.

“From these lands, my father set out as an immigrant to Argentina, and to these lands, rendered precious by the rich fruits of the soil and above all by the native industriousness of their people, I have now returned to rediscover and savor my roots,” he said at the start of his homily.

Asti Bishop Marco Prastaro told Francis he is always welcome back home and recalled that when he was elected pontiff in 2013, Francis quipped that his fellow cardinals had gone to the “ends of the Earth” to find a new pope.

"Today we’d like to think that Asti, the land of your family roots, is the beginning of the world,” Prastaro said as the pope chuckled.

Francis hasn’t returned home to his own birthplace in Buenos Aires since assuming the papacy nearly 10 years ago and he rarely speaks about his family, siblings or childhood. The exception is his frequent reference to the important role his paternal grandmother, Rosa, had in his upbringing and in passing along her Catholic faith.

Francis used some of the Piedmont dialect Rosa taught him in thanking the people of Asti for welcoming him and urged young people in particular to not “stay still thinking about ourselves, wasting our lives and chasing after comfort or the latest fads, but to aim for the heights, get on the move, leaving behind our own fears to take someone in need by the hand.”

Francis’ grandmother, Rosa Vassallo and the pope’s grandfather ran a café in Turin and left Italy to join family members who had settled in Argentina, part of the mass migration of Italians to the Americas at the start of the last century. They and their only son, the pope’s father, Mario Jose Francisco Bergoglio, arrived in Buenos Aires in early 1929.

Once there, Mario Bergoglio met another descendant of Italian immigrant stock, Regina Maria Sivori, whom he married in 1935. A year later, the first of their five children was born: Jorge Mario Bergoglio, the future pope.

The Bergoglio family had originally planned to set sail from Italy at the end of 1927 on the Principessa Mafalda ocean liner, but their departure was delayed as they sold off their home and the Turin cafe. In the end, the Mafalda sank off Bahia, Brazil, on Oct. 25, 1927, killing at least 300 of its more than 1,000 passengers and crew. The Bergoglios set sail the following year, on the Giulio Cesare liner, and have always “thanked divine providence” that they didn’t leave on the Mafalda, the future pope wrote in 1990.

According to family legend, grandmother Rosa stepped off the Giulio Cesare in Buenos Aires wearing a full-length fox-trimmed coat, even though it was the height of summer in the southern hemisphere. In his biography of the pontiff “Pope Francis: Untying the Knots,” historian Paul Vallely explained: “Sewn into its lining was the entire proceeds of the sale of the family’s home and café back in Piedmont.”