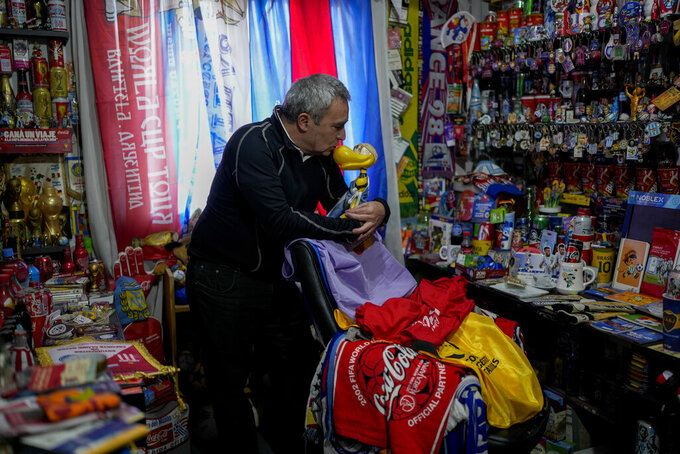 Natacha Pisarenko, ASSOCIATED PRESS
Osvaldo Santander stands with his soccer collection in his home during an interview with The Associated Press, in Buenos Aires, Argentina, Thursday, Aug. 18, 2022. Santander and his son Julian will travel to their third World Cup by means of their savings, selling banners and a TV game show win this year. (AP Photo/Natacha Pisarenko)

Qatar made a promise to fans 12 years ago when it started campaigning to host the World Cup: We love soccer just like you, so come and enjoy it with us.

The message acknowledged there would be skeptics that a tiny emirate whose team had never been to a World Cup — never played a qualifying game until 1977 — could match the passion for soccer’s biggest event shown by the previous host at that time, Germany in 2006.

Some skepticism is still there on the eve of the tournament.

Doubts about LGBTQ fans being safe in a country where same-sex relations are criminalized and in the bemused reaction provoked by Qatar’s plan to pay expenses for about 1,500 fans to visit and be social media influencers.

The invited fans will go to the opening ceremony dressed in each team's colors and sing approved chants before Qatar plays Ecuador in the first game on Nov. 20, then stay for at least two weeks posting positive social media content while reporting trolls to tournament organizers.

Does Qatar “get” soccer culture enough to stage the biggest event in the world’s favorite sport?

Absolutely, one local fanatic in Doha told The Associated Press.

“This whole country is going to turn into a festival — we are all aware of that,” Hamad Al Amari, who watches Premier League matches with a Liverpool fan group, said in a telephone interview. “It doesn’t get any better than this.”

A nation that’s like a city-state — with about 350,000 citizens in a population of less than 3 million — will have its limits tested to cope with the 1.2 million visitors expected during the 29-day tournament.

Some will find themselves watching games in shopping centers, at alcohol-free joints like Lemon Café in the Tawar Mall favored by Al Amari’s group of Liverpool fans.

“People who want to have a pint (of beer) go to hotels. There are sports bars that understand it,” he said, singling out Champions at a five-star Marriott hotel in West Bay.

Budweiser, the World Cup beer sponsor, will be served through the evening at the official FIFA Fan Festival site, a 40,000-capacity area in downtown Al Bidda Park. It’s also where Al Amari, a stand-up comedian, will work as an entertainment host.

The park and the extensive waterfront Corniche area, now closed to traffic, will be hubs for many fans.

Finding a secret spot off the beaten track to watch games will be tough, Al Amari said, and restaurants and shisha bars in the tight lanes of Souq Waqif market will be in heavy demand.

“That’s the hardest (place) to get a seat,” he said. “They are more for the resident patrons who are always there and everyone knows where to sit.”

Not all the demand will come from European fans, at least until the knockout rounds when fervor at home typically kicks in.

The Belgian soccer federation has reported selling hundreds, not thousands, of tickets from the 8% quota of stadium capacity each team gets.

In Switzerland, one of the wealthiest European nations, about half of its quota — 1,500 tickets — have sold for games against Cameroon and Serbia. More but not all were bought for the glamor game against Brazil.

The Swiss soccer body cited as deterrents the cost of traveling to Doha, the limited choice of hotels, and debate about Qatar’s human rights record.

In England, the official group for LGBTQ fans, Three Lions Pride, will not come to this World Cup.

“We understand from our counterparts, the Qatari nationals and migrant group counterparts, that our visibility, our presence would render them vulnerable to systematic institutional and potentially vigilante abuse,” group founder Di Cunningham said this week. “So, no, we’re not going.”

The lure and a World Cup adventure still drives many fans to invest the time and money.

In Argentina — home of soccer icon Lionel Messi — fans face two obstacles to be in Qatar: distance and getting some American dollars.

A tourist package costs about $10,000 for flights, lodging and tickets for three group games. It’s a lot for most Argentines with inflation running at 7% and restrictions on access to dollars forcing up the price of black-market purchases.

Despite this, Osvaldo Santander and his son Julian will travel to their third World Cup by means of their savings, selling banners and a TV game show win this year.

Osvaldo Santander won 1 million pesos (about $6,500) with the best guess of how long the movie Shrek lasts.

“I said 126 (minutes) and it was 93. I won by virtue of being the closest,” he said at his home in Banfield, a suburb south of Buenos Aires.

Santander also sells team banners to help fund renting an apartment with other friends to stay in Doha for one month.

“We are very passionate, crazy fans," Santander said. "We feel that we have a duty in displaying our banners, with our name, our city, our big idols, Leo (Messi) and Diego (Maradona).”

Santander and his son do not yet have tickets for Argentina games. They plan to sell the tickets they got for other teams’ games, including Brazil’s, to pay for seats to the games they want.

Their devotion is typical of World Cup fans, who can also be noisy and boisterous.

Will Qatari people relish such behavior in their socially conservative country?

“We know we are a minority in our own country,” said Al Amari, adding when asked if some citizens would take vacation until the World Cup ends. “There’s a tiny, tiny, tiny percentage of people who are going to leave.”