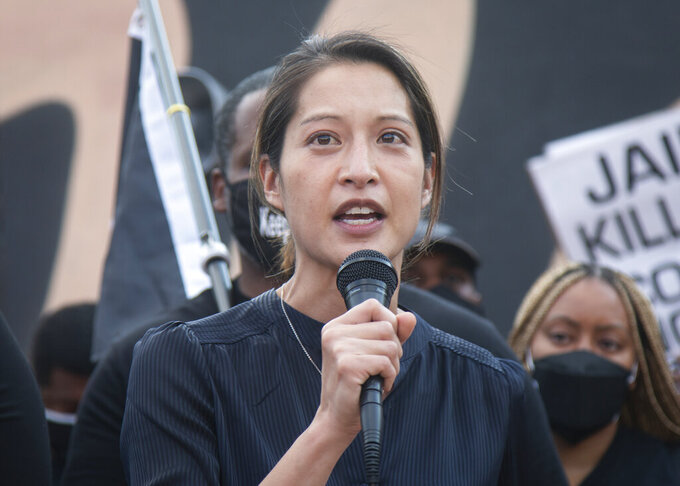 Ron Harris, ASSOCIATED PRESS
State Rep. Bee Nguyen speaks at a demonstration rally following the guilty verdict for the Minneapolis police officer convicted in the death of George Floyd, on Tuesday, April 20, 2021, in Atlanta. Nguyen has now advanced to a runoff in the Democratic primary for Georgia secretary of state. None of the five candidates in the race won a majority of the votes, meaning that the top two finishers advance to the June 21 runoff election. The winner will face Republican incumbent Secretary of State Brad Raffensperger and Libertarian Ted Metz in the November 2022 general election. (AP Photo/Ron Harris)

Nguyen won about 44% of the primary vote, short of the majority she needed to win outright. Dawkins-Haigler won nearly 19%, enough to advance to the June 21 runoff. The winner will face Republican incumbent Secretary of State Brad Raffensperger and libertarian Ted Metz in the November general election.

All five Democratic candidates championed voting rights and criticized a sweeping election law passed by Republicans in the General Assembly in 2021. The secretary of state’s office grabbed the national spotlight in 2020, when former President Donald Trump turned his wrath on incumbent Raffensperger for refusing to try to overturn Trump’s narrow loss to Democratic President Joe Biden in Georgia.