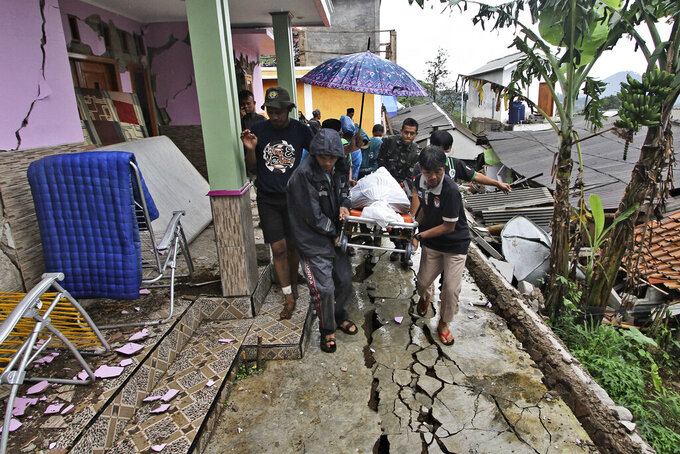 Uncredited, ASSOCIATED PRESS
Rescuers and family members carry the body of an earthquake victim on a gurney before a burial in Cianjur, West Java, Indonesia, Wednesday, Nov. 23, 2022. More rescuers and volunteers were deployed Wednesday in devastated areas on Indonesia's main island of Java to search for the dead and missing from an earthquake that killed hundreds of people. (AP Photo)

CIANJUR, Indonesia (AP) — Searchers in Indonesia on Wednesday rescued a 6-year-old boy who was trapped for two days under the rubble of his house, which collapsed in an earthquake that killed at least 271 people, as heavy monsoon rains lashed survivors in makeshift shelters and forced a suspension of rescue efforts.

The death toll was likely to rise with many people still missing, some remote devastated areas still unreachable and more than 2,000 people injured in Monday's 5.6 magnitude quake. Hospitals near the epicenter on densely populated Java island were already overwhelmed, with patients hooked up to IV drips lying on stretchers and cots in tents set up outside awaiting further treatment.

It was the most deadly earthquake in Indonesia since a 2018 earthquake and tsunami in Sulawesi killed about 4,340 people.

Many of the dead in this week's earthquake were public school students who had finished their classes for the day and were taking extra lessons at Islamic schools when the buildings collapsed, West Java Gov. Ridwan Kamil said.

More than 12,000 army personnel were deployed Wednesday to bolster search efforts by police, the search and rescue agency and volunteers, said Suharyanto, chief of the National Disaster Mitigation Agency.

Suharyanto, who like many Indonesians uses only one name, said aid was reaching thousands of people left homeless who fled to temporary shelters, where supplies were being taken by foot over the rough terrain.

He said rescuers recovered three more bodies Wednesday and rescued a 6-year-old boy, who was found alive next to the dead body of his grandmother under the rubble of his house.

Police, soldiers and other rescue personnel used jackhammers, circular saws, farm tools and their bare hands to desperately dig in the worst-hit area of Cijendil village, where a landslide left tons of mud, rocks and trees.

The government appeared to be focused on finding bodies, and wherever possible, survivors. Authorities struggled to bring tractors and other heavy equipment over washed-out roads to villages hit by landslides.

Residents, however, complained the government was too slow.

Muhammad Tohir, 48, was sitting in his living room with his family in Cijendil when the catastrophe struck. He and his family managed to escape, but his sister and her two children were crushed by a landslide a few kilometers (miles) from his house.

“When I came to my sister’s house, I was devastated by what I saw,” Tohir said. “Dozens of houses had been buried by landslides. … It felt like doomsday.” He said at least 45 people had been buried alive under tons of mud.

Tohir and other residents searched for the missing using farm tools and managed to pull out two bodies. Two days later, rescue personnel arrived to help in the search.

“The government was too slow in responding to this disaster,” Tohir said.

He said he would not give up until they could pull his sister and nieces out of the mud.

About 6,000 police, soldiers and volunteers dug through the debris with their bare hands, shovels and hoes as heavy rain hindered their efforts.

Arif Yulianto, a search and rescue coordinator, said they were forced to halt their efforts Wednesday afternoon because the rain made the landslide areas unstable. He said the search would resume early Thursday.

Suharyanto said 2,043 people were injured, including more than 600 who were still receiving treatment for serious injuries, and that nearly 62,000 survivors had been moved to shelters.

Most sought protection under makeshift shelters that were lashed by the downpours. Only a few were lucky to be protected by tarpaulin-covered tents. They said they were running low on food, blankets and other aid, as emergency supplies were rushed to the region.

About 40 people remained missing, Suharyanto said at a news conference. Rescue operations were focused on about a dozen villages in Cianjur where people were believed trapped.

More than 56,230 houses in Cianjur were damaged and more than 170 public buildings were destroyed, including 31 schools, he said.

About 100 of the 271 confirmed deaths were children, Suharyanto said.

“We are saddened by this earthquake, especially because children have been disproportionately affected,” said Yacobus Runtuwene of Wahana Visi Indonesia, a Christian humanitarian group concerned with child welfare.

The magnitude of Monday’s earthquake, 5.6, would not typically be expected to cause serious damage. But the area is densely populated, and experts said the shallowness of the quake and the lack of earthquake-resistant infrastructure contributed to the damage.

More than 2.5 million people live in rural, mountainous Cianjur district, including about 175,000 in its main town, which has the same name.

President Joko Widodo visited Cianjur on Tuesday and pledged to rebuild its infrastructure and provide assistance of up to 50 million rupiah ($3,180) to each resident whose house was damaged.

The country of more than 270 million people is frequently struck by earthquakes, volcanic eruptions and tsunamis because of its location on the arc of volcanoes and fault lines in the Pacific Basin known as the “Ring of Fire.”