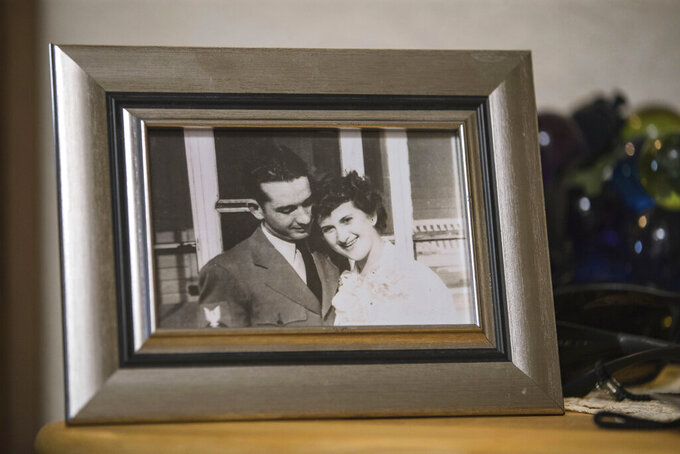 “This is supposed to be the marriage that wouldn’t last,” Thomas said.

But two daughters, seven grandchildren and seven great-grandchildren later and they’re still the best of friends.

Dee, 91, was born in Empire, Ohio and Thomas, 97, was born in Charles Town, West Virginia. They grew up during the Great Depression, watching the country slowly move closer toward war.

In 1941, before the U.S. joined World War II, Thomas joined the U.S. Navy. He was 17 at the time so his mother had to sign for him, but he was determined to get out on open water.

“I love the Navy, I love the water,” Thomas said. “I had this poster they had during World War II sitting around, said ‘Uncle Sam needs you.’ So, I looked at it and I said, ‘you know, I think I need Uncle Sam, too.’”

The war ended in September 1945 and Thomas returned home. About 10 months later, he stepped off a trolley in front of a coffee shop in Norfolk, Virginia. Dee was working inside and immediately noticed Thomas. He saw her, too. Neither could keep their eyes off the other.

“I just thought he was the most beautiful thing I’d ever seen,” Dee said, laughing.

Thomas and Dee talked into the night on his front porch swing and Dee remembers him saying, “If I feel about you like I do now… I’m going to ask you to marry me.” Three weeks later, he did. Dee said she answered “yes” as quick as she could.

On Aug. 9, 1946, the couple married in Indian Head, Maryland, in the home of a Baptist minister who tried to talk them out of it. Only after they tied the knot did Dee — then 16 — tell her parents about the union.

“My folks were just horrified. They were just so angry,” Dee said. “I was visiting my cousin and I wasn’t supposed to be dating — sailors especially.”

Soon they were whisked off on Thomas’ next duty station — Guantanamo Bay, Cuba. Their eldest daughter, Cheryl Samuels was born there in 1947. They have a second daughter, Suzanne Williford.

Tom’s job in the Navy moved them all over the world — Washington D.C. for his work at the Pentagon; Japan; San Diego; and Fort Campbell, Kentucky. He even spent time on the USS Midway aircraft carrier. The months Tom was stationed on a ship at sea were the hardest on their family.

Tom was a chief warrant officer W-3 with a top-secret clearance when he retired from the Navy at Clarksville Base in Tennessee.

The couple moved near Kerrville, Texas and built a home themselves. By 1990, they were living in Moriarty, New Mexico. But the cold winters were becoming too much, so they moved to Las Cruces in 1994.

Cheryl passed away in 2006 from amyotrophic lateral sclerosis, commonly known as ALS or Lou Gehrig’s disease. Suzanne and her husband retired to Las Cruces to be closer to the Houses.

The Houses faced obstacles throughout their life together, but nothing has hindered their devotion to one another. Tom said when they first met, he was obsessed with the idea of being with Dee. And Dee didn’t want Tom to leave her.