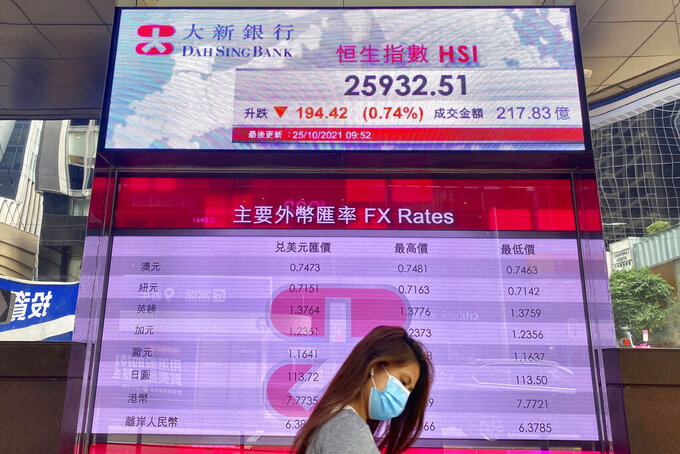 Wall Street’s S&P 500 index declined 0.1% on Friday, weighed down by losses for tech companies after a seven-day streak of gains.

In China, Gansu province in the northwest closed tourist sites Monday after coronavirus cases were found and the capital, Beijing, banned visitors from areas with infections in the past 14 days. China has reported only a few dozen cases, but Beijing’s response of curbing travel prompted concern that they might weigh on economic activity that already is weakening.

“One may expect aggressive measures to control virus spreads, which may put a cap on growth,” said Yeap Jun Rong of IG in a report.

On Wall Street, the S&P 500 ended at 4,544.90 on Friday after losses for big tech companies after a day of choppy trading.

Some 65% of stocks in the S&P 500 closed higher, led mainly by financial and health care companies, but losses in communication and technology companies held the S&P 500 down. Chipmaker Intel slumped 11.7% after reporting disappointing revenue.

Snapchat’s parent company, Snap, plunged 26.6% after reporting weak revenue and disclosing that its ad sales are being hurt by a privacy crackdown that rolled out on Apple’s iPhones earlier this year. Facebook fell 5.1% and Twitter lost 4.8%. Google’s parent, Alphabet, declined 3%.

Investors are looking for clues as to how companies are navigating supply chain problems and rising costs for materials, transportation and other goods and services. Many companies have warned higher costs will hurt operations.

Powell also said the Fed isn’t prepared to lift its benchmark interest rate from near zero. But he suggested the economy might be ready fo ra rate hike next year.