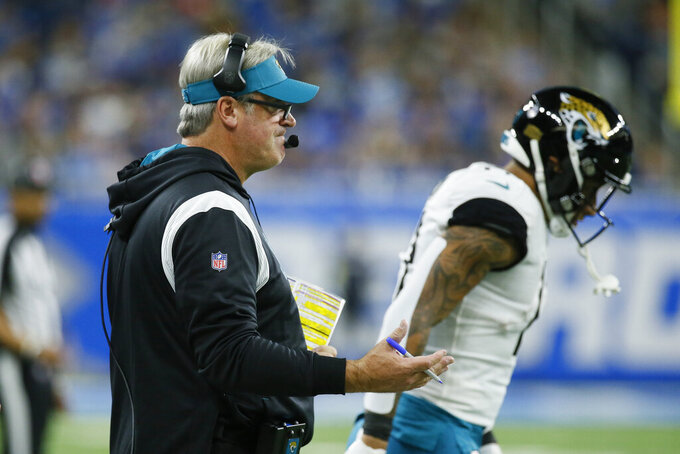 TURNOVER DIFFERENTIAL: Jaguars plus-1; Titans plus-2.

JAGUARS PLAYER TO WATCH: QB Trevor Lawrence. The second-year player insists he plans to play despite a sprained big toe on his left foot. He needs only 166 yards to reach 3,000 yards passing for the season, which would make him the first player in franchise history to reach that mark in the first two seasons of his career. He is questionable after being limited Friday in his return to practice.

TITANS PLAYER TO WATCH: Derrick Henry against the Jaguars’ run defense. The two-time NFL rushing champ has been held to 38 and 30 yards in each of the past two games. But Henry has averaged 5.4 yards per carry and has 1,143 yards rushing in his career against the Jaguars, including 14 TD runs.

KEY MATCHUP: QB Ryan Tannehill and the Titans passing offense against the Jaguars pass defense. The Titans have shown signs of life in that area despite averaging only 171.4 passing yards per game since the return of rookie WR Treylon Burks. They also might get WR Racey McMath back from injured reserve for this game. The Jaguars are giving up 255.5 yards passing per game.

KEY INJURIES: The Titans will be without six players, including three defensive starters. Burks and Titans rookie CB Tre Avery both are in the concussion protocol and out. Titans CB Kristian Fulton (groin), ILB David Long (hamstring), also knocked out of the Eagles loss by injuries, are out. Titans sack leader Denico Autry will miss his third straight Sunday with an injured knee. Tannehill, who missed two games earlier this season with a sprained right ankle, was limited after hurting his left ankle last week. Jaguars WR Zay Jones (chest) and S Andre Cisco (shoulder) are questionable. Jaguars LB Chad Muma (ankle) is out.

SERIES NOTES: The Jaguars are the Titans' longest current division rival going back to Jacksonville's debut as an expansion franchise in 1995. The Titans have won five straight to match their longest winning streak in this series. They've also won nine of the past 10. Titans QB Ryan Tannehill is 7-2 all time against the Jaguars, and Titans coach Mike Vrabel is 7-1 against the Jaguars.

STATS AND STUFF: The Titans are 13-2 for the best division winning percentage in the NFL at .867% since 2020. ... A Titans' victory Sunday ends the Jaguars' division hopes. ... The Titans have lost two straight. The Jaguars have lost two of their past three. ... The Titans have used 76 different players this season, second in the NFL to Arizona's 77, with 25 different starters on defense and rookies combining for 36 starts. Tennessee set an NFL record with 91 different players last season. ... The Titans have allowed more than 20 points in a game twice this season. ... Titans rookie P Ryan Stonehouse leads the NFL with a 53.5 gross punt average. He is tied with Shane Lechler (10 games in 2009), Thomas Morstead (2012), Corey Bojorquez (2020) and A.J. Cole III (2021) for the most in a season in NFL history and can take that mark to himself if he averages 50 yards per punt in one more game. ... Lawrence has gone four straight games without being intercepted and has posted a 105 passer rating or better in three of his past four games. He has 12 TD passes with two TD runs and only two interceptions in six road starts this season. ... Jaguars RB Travis Etienne needs 4 yards from scrimmage to reach 1,000 yards for the first time in his career. ... Jaguars WR Christian Kirk has had three games with at least 100 yards receiving, including last week with six catches for 104 yards. ... Jaguars LB Foyesade Oluokun had a team-high 15 tackles last week. He ranks fourth in the NFL with 128 tackles this season.

FANTASY TIP: Henry. Yes, since Henry ran for 238 yards and four TDs against the Jaguars on Dec. 6, 2018, no NFL player can match what Henry has done since that game. He leads the NFL with 1,245 rushing attempts, 6,167 rushing yards, 60 rushing TDs, 294 rushing first downs or 6,948 scrimmage yards. Beating the Titans means stopping Henry first.