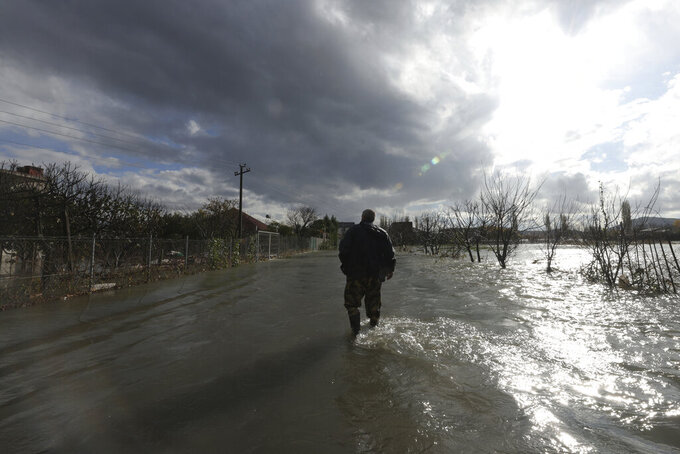 Franc Zhurda, ASSOCIATED PRESS
A man walks through a flooded area at Kuc village, near Shkoder, northwestern Albania, on Monday, Nov. 21, 2022. Authorities say torrential rain over 48 hours in the Western Balkans have claimed at least six lives and flooded agricultural land and homes with Albania's districts of Shkoder and Lezhe being the most impacted areas. (AP Photo/Franc Zhurda)

One of the most impacted areas was in northwestern Albania, where thousands of acres of agricultural land and hundreds of homes were flooded. Authorities evacuated scores of families amid power outages.

Early Monday, police divers found the bodies of two missing men, a father and son whose car was washed away Sunday in the village of Boge, some 150 kilometers (90 miles) north of the capital Tirana.

Swollen rivers in Montenegro and parts of Serbia claimed four lives over the weekend. A woman and her two children drowned in Montenegro when their car plunged into a river as it was going over a bridge. In southern Serbia, a 2-year-old boy drowned after falling into a river.

Authorities in the southern Serbian region of Raska proclaimed a state of emergency because of the heavy flooding and the army was deployed to help the local population with evacuations and deliveries of drinking water and food.

Torrential rain of up to 400 millimeters (14 inches) in 12 hours on Sunday caused the Drini River, the longest in Albania, to overflow its banks by at least 10 centimeters (4 inches), according to the authorities.

At least 3,000 hectares (7,500 acres) of agricultural land was flooded in Shkoder and Lezhe districts, some 100 kilometers (60 miles) northwest of Tirana.

Hundreds of army troops were sent to evacuate families after more than 600 homes were flooded.

“Shkoder is at the moment isolated from the rest of the country,” said Mayor Bardh Spahia.

Farmers, who have repeatedly suffered from floods in the post-communist era, voiced despair at their losses, which included livestock, and asked the government to help.

The historic 18th century Lead Mosque in Shkoder was also under water — after suffering damage from past floods.

Flooding also affected areas in western Kosovo, causing some damage to buildings and school closures but no reported casualties.