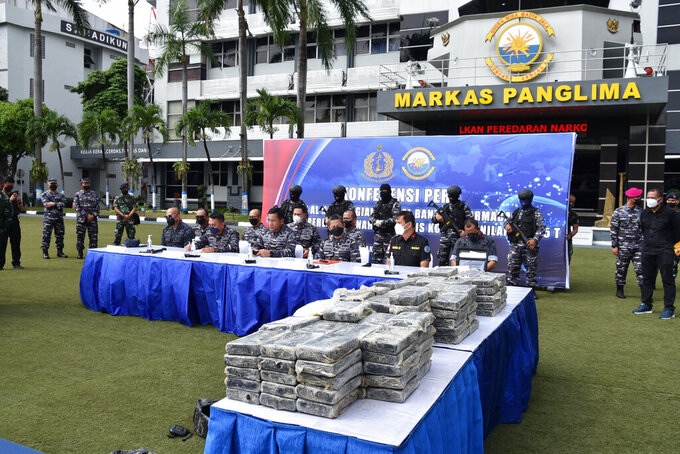 Indonesia Navy, ASSOCIATED PRESS
In this photo released by the Indonesian Navy, navy personnel display packages containing 179 kilograms (nearly 400 pounds) of cocaine worth of 1.2 trillion rupiah ($82.6 million) during a media conference at the Western Fleet headquarters in Jakarta, Indonesia, Monday, May 9, 2022. Sailors deployed to secure travel during the Eid al-Fitr holiday made the country's biggest cocaine seizure so far after finding the plastic packages of the drugs floating at sea, the navy said. (Indonesian Navy via AP)

Indonesia is a major hub for drug trafficking in Southeast Asia and has strict drug laws, with convicted smugglers sometimes executed by firing squad.

Smuggling drugs by throwing packages and a buoy into the sea is a common tactic, Vice Adm. Ahmadi Heri Purwono said. Smugglers likely put the drugs in the water near a port for them to be moved by a speedboat and were monitoring the packages when they were seized by the navy, he said.

“This is a spectacular seizure of cocaine, considering its huge value and the impact on the people as a result of the illicit drugs,” Purwono said. No one has been arrested, and authorities are still investigating, he said.

The officers who spotted the package were among 5,000 navy personnel deployed to secure Eid al-Fitr homecomings. Millions of Indonesians celebrate the holiday at the end of the Muslim holy month of Ramadan by traveling to see their families across the vast archipelago.

Most of the more than 150 people on Indonesia's death row were convicted of drug crimes. About one-third of them are foreigners. Its last executions were in 2016, when an Indonesian and three foreigners were shot by a firing squad.