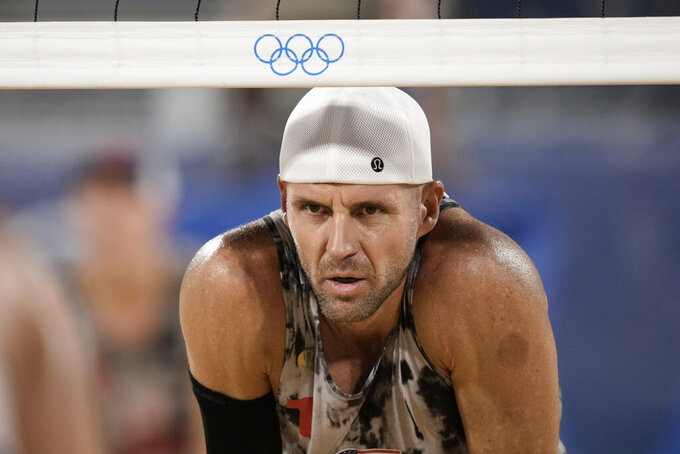 TOKYO (AP) — At 45, Jake Gibb is almost certainly at his last Summer Games. And yet the four-time Olympian offered to give it up for the remote chance that Taylor Crabb could have the experience even once.

“At the end, Jake and (coach Rich Lambourne) told me it was my decision to make. They’ll stick by me whatever I want to do,” said Crabb, who tested positive for COVID-19 and withdrew from the Olympics so that Gibb could replace him on two-person beach volleyball team.

“I was not going to risk this opportunity for Jake and Rich,” Crabb told The Associated Press. “This is Jake’s last year. This is everything he’s worked for. I want him to go out on top. This is our goal coming into it. And I want to see him fulfill that.”

Although he was vaccinated, asymptomatic and had provided the required negative results before boarding his flight, Crabb came back positive during intake testing on Sunday after arriving in Tokyo. He continued to submit samples, hoping for a negative test that would have allowed him to return to the Games, but he withdrew on Thursday night, hours before the deadline for the U.S. governing body to submit its roster.

Alternate Tri Bourne joined Gibb on the sand Sunday night for their first match, a straight-set victory over Italy.

“Taylor is my brother. I love him. We’ve gone to battle for five years together. And so it's hard,” Gibb said after the 21-18, 21-19 victory over skyball specialist Adrian Carambula and Enrico Rossi.

“But we’re ready to fight together, and we have Taylor with us. We honestly feel that,” Gibb told reporters after the match. “I feel like it’s unfair for the rest of the world: We've got 3-on-2 out here.”

Crabb told the AP from his quarantine hotel in Tokyo that Gibb offered to forfeit the first match and even the second one, on Wednesday, on the chance that the extra time would allow the Olympic first-timer to provide the negative tests that would have allowed him to play.

Two losses to start the Olympics almost certainly would have doomed their chances of moving on to the knockout round. But there also was no guarantee that Crabb would have gotten out of quarantine in time for the third and final match of the round robin.

“There was a risk of me still having dead virus in me and testing positive,” he said. “And if there was a 1% chance that I would test positive and ruin this moment for our team, I was not going to let that happen.”

Instead, Crabb has been in his hotel room for more than 23 hours a day, FaceTiming with friends and family until he will be allowed to board a plane, perhaps as early as Tuesday night. He also has been helping his former team scout opponents.

“It still makes me feel important and part of the team, which is huge for me,” he said. “Because if I didn’t have that, along with the devastation of not being able to play with them, that would have been worse for sure.”

Also on the court Sunday, U.S. women April Ross and Alix Klineman won their Tokyo opener, 21-17, 21-19 over the Chinese team of Xue Chen and Wang Xinxin. Ross and Klineman next play Spain on Tuesday.

In other notable matches, 2016 gold medalist Bruno Schmidt of Brazil and his new partner, Evandro, needed three sets to get past Chile, and the Qatari team of Cherif Samba and Ahmed Tijan cruised to a two-set win over Switzerland's Mirco Gerson and Adrian Heidrich.