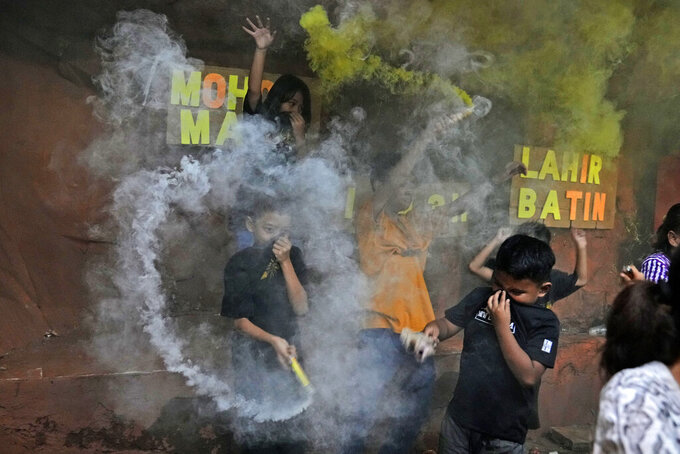 JAKARTA, Indonesia (AP) — Millions of Muslims in Indonesia returned to celebrate Eid al-Fitr in full swing Monday after two years of subdued festivities due to pandemic restrictions and travel curbs.

Eid al-Fitr marks the end of the Islamic holy month Ramadan, when the faithful fast from dawn to dusk.

The return of the Eid tradition of homecoming has caused great excitement for people in the world’s most populous Muslim-majority country, as family gatherings and meet-ups with friends were on people’s lists while shoppers flocked shopping centers despite surges in food prices.

In the past week, millions of Indonesians have crammed into trains, ferries, busses and — in greater numbers than ever — motorcycles, as they poured out of major cities to return to their villages to celebrate the holiday with families amid severe traffic congestion starting to occur on major thoroughfares across the country.

Flights were overbooked and anxious relatives weighed down with boxes of gifts formed long lines at bus stations for journeys that can take days.

The annual exodus tradition, known locally as “mudik,” returned this year after President Joko Widodo surprisingly announced last month that the government decided to ease restrictions for the holiday festivities for the first time since it was banned two years ago due to COVID-19.

The country had largely recovered from a third wave of COVID-19 infections as an omicron-driven surge peaked at around 64,700 daily cases in mid-February. New daily infections had fallen to around 200 by May. About 80% of Indonesia’s eligible population of 208.2 million people have been fully vaccinated as of Sunday.

The government estimates around 85 million travelers were expected to crisscross the vast archipelago that spans 17,000 islands for Eid al-Fitr this year, with about 14 million travelers departing from Jakarta’s greater metropolitan area. This is significantly higher than pre-pandemic, when some 30 million people participated in the annual exodus tradition.

Worshippers wearing masks joined communal prayers shoulder-to-shoulder without physical distancing in the streets of Indonesia’s capital, Jakarta, and in mosques across the city.

In Jakarta’s Istiqlal Grand Mosque, the largest in Southeast Asia, tens of thousands of Muslims attend prayers after authorities shuttered the mosque in 2020, when Islam’s holiest period coincided with the start of the coronavirus pandemic. The Istiqlal mosque was totally closed during 2020 and remained closed for congregational prayers in 2021.

“Words can’t describe how happy I am today. After two years we were separated by pandemic, today we can do Eid prayer together again,” said Epi Tanjung, a resident in Jakarta. “Hopefully all of these will make us more faithful,” he said after worshiping with his wife at Jakarta’s Al Azhar mosque where Muslims were seen embracing one another after prayers.

Despite soaring food prices in the past month, popular markets such as Tanah Abang in Jakarta were teeming with shoppers buying clothes, shoes, cookies and sweets before the holiday. Security personnel were overwhelmed by thousands of shoppers and traders who ignored health protocols.

The Trade Ministry has said that prices of imported staple foods including wheat, sugar, beef and soybeans had seen the sharpest year-on-year rise in 2022 as a result of rising global commodity prices and supply chain disruptions, particularly following Russia's invasion of Ukraine.

Prices may go higher as loosened pandemic restrictions coupled with the Eid al-Fitr festivities and the end of the Ramadan fasting month increase domestic food demand.

“Food prices, which are getting higher day by day, certainly affected my life,” said Aneke Karolina, a mother of two in Jakarta.

"But falling trust in government makes it harder, as this is an annual problem ahead of Eid,” she said, adding that she hopes the prices would return to normal as they have in the past after the holiday celebration's end.