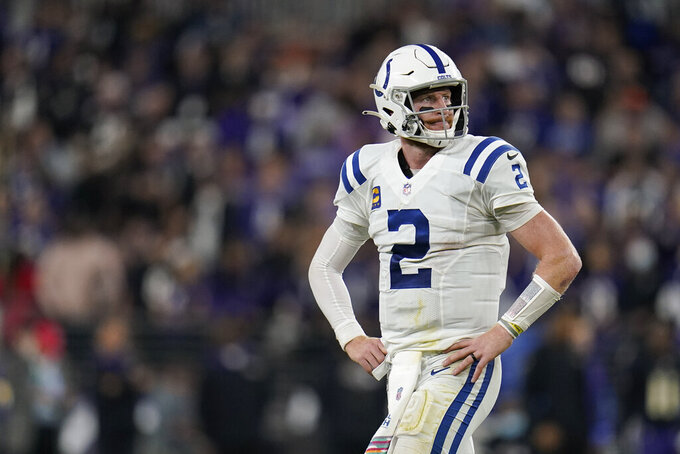 Julio Cortez, ASSOCIATED PRESS
Indianapolis Colts quarterback Carson Wentz (2) walks off the field during the second half of an NFL football game against the Baltimore Ravens, Monday, Oct. 11, 2021, in Baltimore. (AP Photo/Julio Cortez)

“Painful loss, painful loss," he said less than 24 hours after watching a 16-point, fourth-quarter lead evaporate in what seemed like a blink of an eye Monday night.

Then he quickly moved on — just as he needs his team to do after losing a game that could have turned around the Colts' season. They'll get another chance Sunday when they face Houston in their first home game since Sept. 19.

Reich found plenty to like on tape. Quarterback Carson Wentz was efficient. The run defense played well and for three quarters, Indy was the dominant team.

But the Colts spent the final 12 minutes scrambling, particularly on a defense that finished without three of its top four cornerbacks because of injuries. Ravens quarterback Lamar Jackson, the league's 2019 MVP, took advantage by throwing two touchdown passes and connecting for two 2-point conversions in the final 10 minutes of regulation. He completed the comeback with another TD pass midway through overtime.

And Indy again squandered red-zone opportunities by settling for two late field-goal chances, which could have sealed the game. Instead, injured kicker Rodrigo Blankenship's best chance was blocked, and he missed the potential winner wide left as time expired in regulation.

The result left the Colts frustrated, flabbergasted, and two games behind Tennessee in the AFC South.

Now, with a short week, there's no time to waste in leaving this loss behind.

If the Colts beat the struggling Texans, it could help take some of the sting out of Monday's historic collapse. If they lose and fall to 1-5, Indy would have to replicate its 2018 comeback run just to make the playoffs.

We've got to keep fighting to get better, learn from our mistakes, learn how to finish games," Reich said. “Players and coaches, we're all in it together and we've all got to do it together."

The oft-criticized Wentz has strung together his two best games the last two weeks and played well enough to win both. No, he hasn't been perfect. But he's mostly avoided turnovers — even with two sprained ankles — and on Monday he led the Colts to four straight scores and consecutive field-goal attempts on their final six possessions.

Red-zone offense. Indy had three drives of nine or more plays that resulted in no points and went 1 for 4 in the red zone while failing to score on two of those trips inside the Ravens 20-yard line. It turned out to be the difference between a win and a loss.

Indy's two second-round draft picks from 2020, WR Michael Pittman Jr. and RB Jonathan Taylor, are rounding into form. Pittman has 36 catches and 339 yards since Week 2. Taylor has 41 carries for 220 yards and one touchdown over the past three weeks. Taylor also caught three passes for 116 yards and one TD in Baltimore.

Blankenship. Until Monday, Blankenship had been playing almost flawlessly. But a hip injury he first felt during pregame warmups nearly led to a missed scoring opportunity in the first half, and after opening the second half with a botched extra point, he missed from 37 and 47 yards in the final five minutes of regulation.

Reich's only update on Blankenship was that he was scheduled to get an MRI on Tuesday. Cornerback Xavier Rhodes and safety Andrew Sendejo have both entered the concussion protocol. Reich wouldn't say whether right tackle Braden Smith (foot) could return this week. Left guard Quenton Nelson (sprained ankle) and receiver T.Y. Hilton (neck surgery) remain on injured reserve and safety Ibraheim Campbell (ankle) was put on practice squad injured reserve Tuesday.

120-1 — Since moving to Indy in 1984, the Colts had won 120 consecutive games when leading by at least 16 points in the fourth quarter. Now they're 120-1, blowing the big lead for the first time since their final game in Baltimore.

Turning the page quickly is a must if the Colts hope to get this season back on track. The good news is they played well offensively and defensively, until the secondary became depleted. But Indy ended the Ravens' NFL record-tying streak of 43 consecutive games with 100 or more yards rushing and Wentz seems to be getting in sync. It's a promising combination — if the Colts can figure out how to finish games.