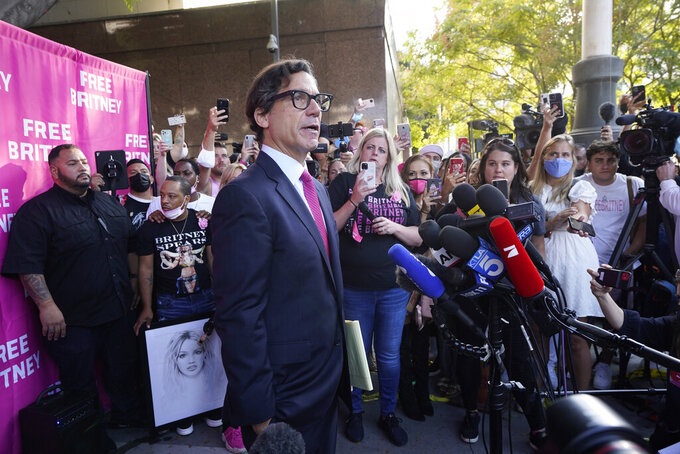 Chris Pizzello, ASSOCIATED PRESS
FILE - In this Wednesday, Sept. 29, 2021, file photo, Britney Spears' attorney Mathew Rosengart speaks outside the Stanley Mosk Courthouse, in Los Angeles. Media and the public initially were allowed to listen remotely to court proceedings as Spears sought to end her father's conservatorship over her finances. But Los Angeles County Superior Court canceled the remote access after someone recorded a hearing. The court instead allowed more people into the courtroom. (AP Photo/Chris Pizzello, File)

Just two reporters were allowed inside a Georgia courtroom to serve as the eyes and ears of the public when jury selection began for the men charged with murdering Ahmaud Arbery. Pandemic restrictions also kept reporters and the public out of the courtroom during the sex-trafficking trial of music star R. Kelly.

And in an Ohio courtroom, a federal judge relegated the press to an overflow room to listen to an audio feed for the trial of a Chinese national charged with trying to steal trade secrets from U.S. companies.

A year-and-a-half into the coronavirus pandemic, courts across the U.S. are still grappling with how to balance public health concerns with the constitutional rights of a defendant and the public to have an open trial. There's no standard solution. Some courts are still functioning entirely virtually. Others are back in person. And many are allowing only limited public access.

“This is a fundamental constitutional right that the public has — to have open courts and to be able to see what’s happening in real time in a courtroom,” said David Snyder, executive director of the First Amendment Coalition, which has prodded California courts to improve public access during the pandemic.

COVID-19 space constraints have led judges across the U.S. to exclude or limit public and media attendance at trials.

During Kelly's trial, which concluded last month with his conviction, a federal judge in New York barred the press and public from the courtroom because jurors were sitting six feet apart in the gallery normally used by observers. Onlookers could watch a live video feed in an overflow courtroom, but it offered no view of the jury and only limited images of the defendant, witnesses and exhibits. At one point, prosecutors played a recording that jurors listened to with headphones, with no audio available for the press and public.

The judge rejected a request by media groups, including The Associated Press, to allow pool reporters in the courtroom for much of the trial, letting six reporters in only when the verdict was announced.

A similar scenario played out last week in Ohio, where a federal judge cited the pandemic while keeping the public out of the courtroom for the trial of Yanjun Xu, a Chinese official accused of trying of steal trade secrets from U.S. aviation and aerospace companies. There was no public access to jury selection. Audio of the trial was played for media in a conference room.

Overflow rooms are better than nothing but often leave observers unable to see the full context of what's occurring, like the reaction of jurors as evidence is presented, said New York attorney Rachel Strom, who represented media in the R. Kelly case.

"We don’t know what we missed by not having someone actually in the courtroom,” Strom said.

After the AP and other media filed legal motions, a Georgia judge granted just two media pool seats in the courtroom right before the start of jury selection in the trial of three white men charged with chasing and killing Arbery. Graphic cellphone video of the 25-year-old Black man being shot sparked outrage nationally last year, and the trial is being closely watched as a referendum on how the legal system treats Black victims. The judge has since allowed a third reporter and a photographer into the courtroom.

In another high-profile case, the press and public initially were allowed to listen remotely to court proceedings as pop star Britney Spears sought to end her father's conservatorship over her finances. But Los Angeles County Superior Court canceled the remote access after someone recorded a hearing, and the court refused to reinstate it for a September hearing when Spears was freed from her father's oversight. The court instead allowed more people into the courtroom.

USA Today recently asked the California Supreme Court to order the restoration of remote audio for the public and media.

“No one should have to risk their health to exercise their constitutional right of access by travelling to, and attending, court in person,” USA Today said in its court filing. It also suggested the remote audio program should continue “even when the pandemic ends.”

The California request highlights how the pandemic has shifted expectations about what qualifies as public access.

“As courts open back up, they should strongly consider keeping some amount of remote access available to the public,” said Lin Weeks, an attorney at the Reporters Committee for Freedom of the Press.

Court officials say the virtual proceedings have saved time and money for attorneys, jurors, litigants and defendants, who no longer have to travel to a courthouse, take extensive time off work or arrange child care. Courts also have seen fewer no-shows among those summoned to virtual jury pools and, as a result, greater diversity on juries.

“It has been a lifeline as we’ve tried to keep the justice system moving during the pandemic, but it’s also been transformational,” said Sean O’Donnell, a superior court judge in King County, Washington, home of Seattle.

King County judges have conducted about 700 online trials, including about 50 with jurors. During a trial that O’Donnell presided over last week, the judge, attorneys, witness and jurors appeared on a 20-tile Zoom screen that the public could view on YouTube. Two jurors sat in clothes closets. One participated from his vehicle. Another was chided by O’Donnell to remove his cat from the camera view. A witness testified from Oregon, a couple hundred miles away.

Despite those oddities, the virtual trial progressed much like a regular trial, with attorneys taking turns questioning witnesses and evidentiary documents displayed on the screen for all to see. There even were periodic breaks where participants stood up and stretched.

Conducting the trial virtually also freed up space at the courthouse. To accommodate social distancing, in-person trials are using as many as three separate courtrooms — one for the actual trial, a second for the public to view it remotely and a third for the jury to use during breaks and deliberations, O’Donnell said.

Across Hawaii's chain of islands, the ability to observe courts virtually has increased public access during the pandemic.

John Burnett, a reporter for the Hawaii Tribune-Herald, wasn't able to cover state Supreme Court or U.S. District Court proceedings before the pandemic because it required a 50-minute plane ride from Hawaii, also known as the Big Island, where his newspaper is based, to Honolulu on the island of Oahu. Now he regularly listens by phone to federal court cases and watches state Supreme Court arguments on YouTube.

“I think they should become permanent things because let’s face it, we’re talking about public information here,” Burnett said. “If we can’t get our boots on the actual ground, at least if we can have virtual ground — that’s as good of a substitute as we could possibly hope for.”