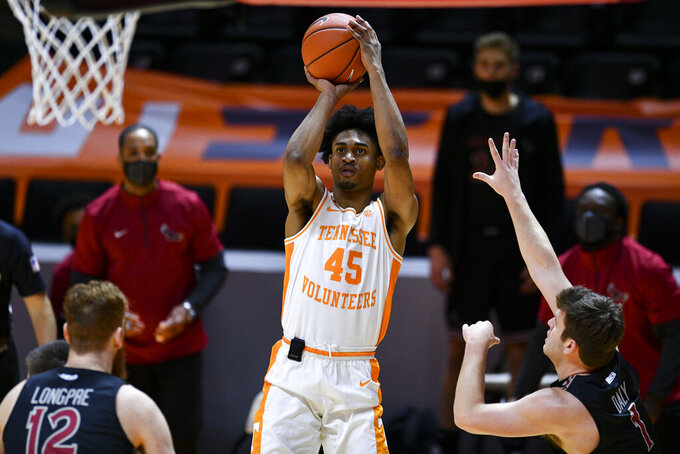 Cade Cunningham spent years honing his game for a shot at becoming the No. 1 overall pick in the NBA draft.

The Oklahoma State one-and-done star could accomplish that goal Thursday night as the headliner of a class that includes scorers, playmakers and potentially elite defenders at the top.

“I’ve been saying for a long time,” Cunningham said, “we have one of the best classes in a long time. And I’m really appreciative of the fact that we’ve all been pushing each other throughout us coming through high school and things like that.”

Only time will tell how deep the class really is.

But Cunningham won't be have to wait long Thursday night. His is expected to be the first name called when the Detroit Pistons open the draft in New York, while the rest of the top tier comes from Cunningham's same 2020 high school recruiting class.

And there are preps-to-pros prospects in guard Jalen Green and forward Jonathan Kuminga, with each bypassing college basketball to play in the G League.

“Our talent on the floor speaks for itself,” said Suggs, a former star football player who was named Mr. Football in Minnesota. “But off the floor and in locker rooms, we’re guys who lead and guys who you want in your locker room.”

ESPN basketball analyst Jay Bilas said depth at the top of this draft was the best since 2003, which produced perennial All-Stars LeBron James, Carmelo Anthony, Chris Bosh and Dwyane Wade in the first five picks.

“Look, having LeBron in a draft was certainly better,” said Bilas, a former Duke player. “Zion (Williamson in 2019) made it more interesting that year. But none of the drafts that I can remember since 2003 have combined power at the top and depth of really good talent like this.”

It starts with Cunningham, mentioned as candidate to go No. 1 before ever playing for the Cowboys. The 6-foot-8 point guard and first-team Associated Press All-American averaged 20.1 points while working as an effective playmaker.

“Any time I watch basketball or I’m just watching the playoffs, their playmaking ability shows how much they know the game and just their feel for the game,” Cunningham said. “If you can make plays for your team and help put your teammates in winning positions, you can always find yourself getting playing time.”

Detroit and the other teams atop the draft certainly could use that kind of help, too.

The Pistons won last month’s lottery for the top pick after a second straight 20-win season, and they haven’t finished better than .500 for five straight years. General manager Troy Weaver wouldn’t reveal plans for Thursday, noting: “Everybody’s made the pick but us.”

Weaver said Detroit would look at every scenario, including trades.

“I don’t see Shaq or LeBron but I see some high-level guys,” Weaver said.

Houston checks in at No. 2, the first of three first-round selections as the Rockets rebuild following the James Harden trade to Brooklyn and a league-worst 17 wins.

Cleveland has its only pick at No. 3 for a roster in flux since James left after the 2018 season. The Cavaliers have one of the league’s youngest teams with promising guards Collin Sexton and Darius Garland, who along with forward Isaac Okoro and center Jarrett Allen comprise the team’s “core four.”

Toronto sits at No. 4 followed by Orlando – which also owns the No. 8 pick – and Oklahoma City to round out the top tier's potential landing spots. The Thunder, also in rebuilding mode, join the Rockets with three first-round selections, all in the top 18.

Then there's Golden State. The Warriors, expected to have Klay Thompson back from injuries alongside NBA scoring leader Stephen Curry, have the No. 7 and No. 14 picks to help fuel what could be a quick return to prominence after three world championships from 2015-18.

The draft is later than its traditional late-June slot for the second straight year due to the COVID-19 pandemic that interrupted the 2019-20 season. Last year’s draft took place in November with the season beginning in December and the NBA Finals wrapping up last week.

The 2021-22 season is scheduled to return to its normal schedule, with next year's draft set for June again.