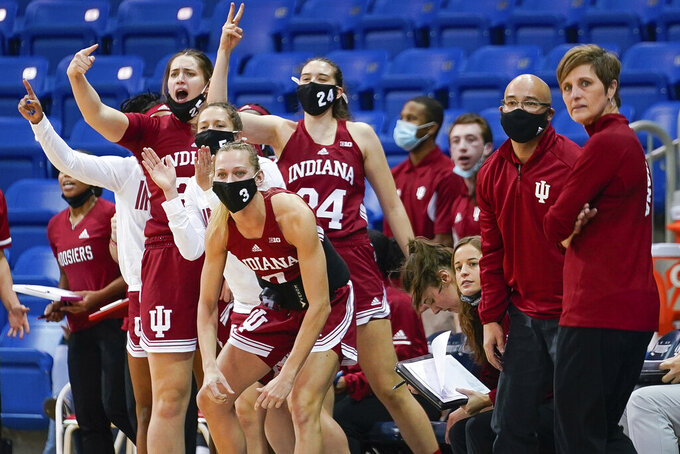 Bryan Woolston, ASSOCIATED PRESS
The Indiana bench celebrates a score during the first half of an NCAA college basketball game against Quinnipiac on Saturday, Nov. 20, 2021, in Hamden, Conn. (AP Photo/Bryan Woolston)

Indiana (4-0) finished with four starters scoring in double figures, including Ali Patberg with 12, and Nicole Cardano-Hillary and Mackenzie Holmes each with 10.

Indiana fell behind 12-2 at the outset and trailed by as many as 13 points in the first half.

“We’re a veteran team, we’ve been in this spot before where we’ve been down,” Berger said. “We don’t ever freak out.”

The Hoosiers came in with all five starters averaging at least 12 points, including Aleksa Gulbe. She finished with eight points.

Down 33-27 at the half, the Hoosiers swung momentum by getting Holmes on track. She came in averaging a team-high 20.7 points per game but got into early foul trouble and scored only two points in the opening half.

“We knew we were going to have to be much better in the second half,” Indiana coach Teri Moren said. “I think (Mackenzie) started figuring things out … and we did much better eliminating their 3s.”

Quinnipiac was 5 for 12 on 3-pointers in the first half but made just 1 of 4 in the second.

Holmes scored three straight baskets on an 8-0 run in the third quarter that cut the Quinnipiac lead to 41-38. Berger tied it at 43 with a three-point play with 1:05 left, and Cardano-Hillary’s foul shot gave Indiana its first lead, 44-43, with 50 seconds left.

The Hoosiers ran into trouble early and lost Holmes to her second foul with 6:13 left in the first quarter.

“It was a block party underneath. We set the tone that we’re here to play and we’re here to win,” Quinnipiac coach Tricia Fabbri said. “We love a challenge. We play to win every game no matter who’s wearing the uniform, and it’s exciting to have Indiana come in here.

“We were ready to play.”

The Bobcats were 5 of 12 on 3-pointers and never trailed in the opening half. DeWees led the way with eight points. Berger’s buzzer-beating 3-pointer at the end of the half helped Indiana cut the deficit to six.

“(The shot) helped, but really it was us doing the little things in the second half, guarding ... rebounding and making layups,” Berger said. “That really gave us momentum in the second half as opposed to my shot.”

STAT OF THE NIGHT

After being silenced on the fast break in the first half, the Hoosiers scored 12 fast-break points in their second-half comeback, including eight in the third quarter.

Indiana: The Hoosiers carry their unbeaten record into the Baha Mar Pink Flamingo Classic, where they will have a top-10 showdown with No. 7 Stanford on Thursday and then Miami on Friday in Nassau, The Bahamas.

Quinnipiac: The Bobcats, who were picked to win the Metro Atlantic Athletic Conference, gave one of the top teams in the country a fight and should be able to build off the effort.

Connecticut Sun coach Curt Miller was at the game. Miller was a former coach with the Hoosiers. … Indiana led for only 10:51 of the game. ... Fourth is the highest Indiana has ever been ranked in the AP poll. … This was the first meeting between the schools and the highest-ranked opponent Quinnipiac has ever hosted.

Indiana: vs. No. 7 Stanford on Thursday in Nassau, The Bahamas.

Quinnipiac: At George Washington on Monday.