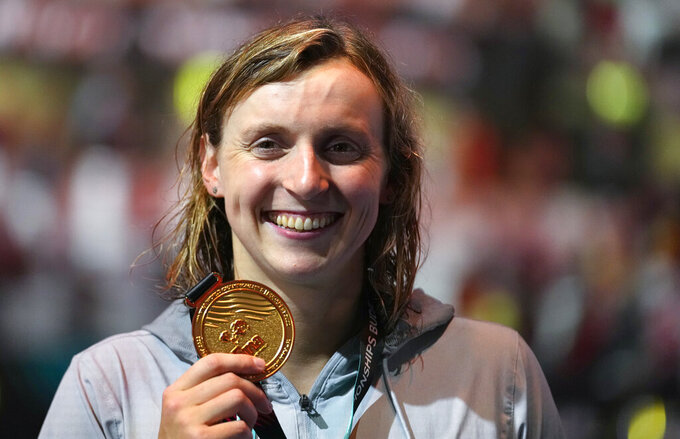 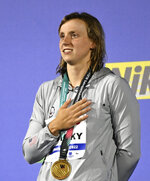 BUDAPEST, Hungary (AP) — Katie Ledecky extended her record haul of medals from the world swimming championships to 22 with her latest 800-meter freestyle win on Friday.

Ledecky clocked 8 minutes, 8.04 seconds to win the event for the eighth consecutive time at a worlds or Olympic Games.

“I think back to London,” Ledecky said of her first win at the 2012 Olympics. "I made it a goal to not be a one-hit wonder and here we are 10 years later, so I'm really proud of that and still excited for the future as well.”

Ledecky finished more than 10 seconds ahead of her rivals. Australia’s Kiah Melverton was 10.73 behind in second and Italy’s Simona Quadarella 10.96 behind for third.

Ledecky was under four seconds off the world record she set at the 2016 Olympics.

“I’m happy with that,” she said. “Fastest I’ve been in a couple of years. So really good end to a great week.”

Ledecky is the first swimmer to win a specific individual event at five successive worlds.

She completed the 400/800/1,500 triple for the fourth time at a single worlds, more than all the other swimmers who managed the feat combined. Germany's Hannah Stockbauer, Australia's Grant Hackett and China's Sun Yang each managed it only once.

Ledecky has the most medals for a female swimmer in world championships history. Only Michael Phelps, who won 26, has more.

And she's not finished yet.

“This is just the start, which is tremendously exciting for me,” said Ledecky, who added changes to her approach are paying off.

“There have been a couple of things that are a little different – training with the men, Bobby (Finke) and Kieran (Smith) and Trey (Freeman), who are all here, to try to keep up as much as I can and they push me," Ledecky said. "I hope that they feel that they’ve benefited from me being there, and just a lot of work on my stroke and and my rhythm.”

With one day of racing remaining at Duna Arena, the United States has 37 medals, just one short of the record 38 it claimed the last time Budapest hosted the worlds in 2017.