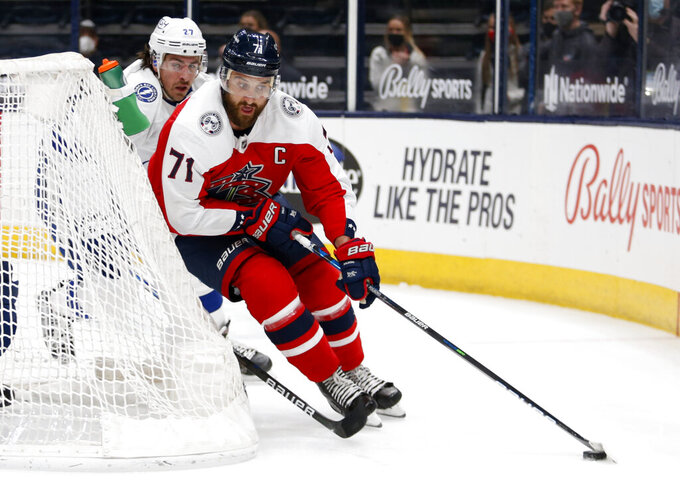 Nick Foligno's time in Columbus is over, with the Blue Jackets trading their longtime captain to the Toronto Maple Leafs to chase the Stanley Cup.

Columbus received a 2021 first- and 2022 fourth-round pick from Toronto as part of the three-team trade completed Sunday, which also involved the San Jose Sharks. That was a worthwhile return for the Blue Jackets to part with Foligno, who was one of the faces of the franchise for almost a decade.

The Blue Jackets added their second first-round pick in as many days for a prominent player while agreeing to retain half of Foligno's $5.5 million salary-cap hit.

“Given where we are right now, this move made sense for us as an organization and for Nick,” Blue Jackets general manager Jarmo Kekalainen said.

Toronto also acquired forward Stefan Noesen from San Jose, which got a fourth-round pick in this year's draft for retaining 25% of Foligno's salary. Foligno and Noesen must quarantine seven days under Canadian protocol rules before being able to join their new team.

This trade was similar to the one Columbus made Saturday by sending defenseman David Savard to the Tampa Bay Lightning for a first-rounder this year and third-rounder next year. The Blue Jackets are stockpiling high draft picks by selling ahead of the NHL trade deadline after falling out of playoff contention.

Seeing Savard, who was tied as the organization's longest-tenured player, get traded to the defending champions was a signal to Foligno that things were changing and he could be next.

“I really appreciate Jarmo allowing me the opportunity to go and chase my dream of winning a Cup with a team that I feel has a great opportunity of doing that,” said Foligno, who had a say on his destination with a no-trade clause. "I feel really good about the decision we made.”

Foligno, 33, has seven goals and nine assists for 16 points in 42 games this season. He was captain of the Blue Jackets for the past six seasons and is a veteran of 950 regular-season games with Ottawa and Columbus.

“Nick Foligno has been everything you’d want in a captain, in a representative of your team and ambassador for your community," Kekalainen said. “His contributions to the Blue Jackets franchise and the impact he and his family have had off the ice is immeasurable.”

Foligno, whose father played parts of four seasons for Toronto, gives the North Division-leading Maple Leafs some grit and experience up front. He'll wear No. 71 like Mike Foligno did and said of duplicating his father's famous leap, “If it’s a Game 7 overtime, I’m sure I’ll jump just out of pure joy.”

There hasn't been much joy in Toronto come playoff time in many years. The Maple Leafs have lost their first playoff series in each of the past four seasons despite a talented core led by Auston Matthews.

They hope Foligno and his 51 games of NHL playoff experience provide the answer to what's ailed them in the postseason. Foligno and the Blue Jackets eliminated Toronto in the qualifying round last year, and he believes that five-game series defeat will prove important in another attempt to win the franchise's first title since 1967.

“I felt like they were a team that learned a lot about themselves,” Foligno said. “I just felt it was a fit for me just in the sense of just what I can bring and help.”

Foligno, who's a pending free agent, didn't rule out returning to Columbus this summer. But that's not his immediate concern.

“I’m full steam ahead with the Toronto Maple Leafs,” he said. "That’s my focus, and that’s what they deserve, and I’m excited about this opportunity. I’m thrilled to get going with these guys and see what I can do and how I can help and hopefully it’s all good things.”

In a separate trade Sunday night, Toronto acquired goaltender David Rittich from the Calgary Flames for a 2022 third-round pick. After these moves, the Maple Leafs have just three picks (rounds two, five and six) in this year's draft and four next year (rounds one, two, five and six).