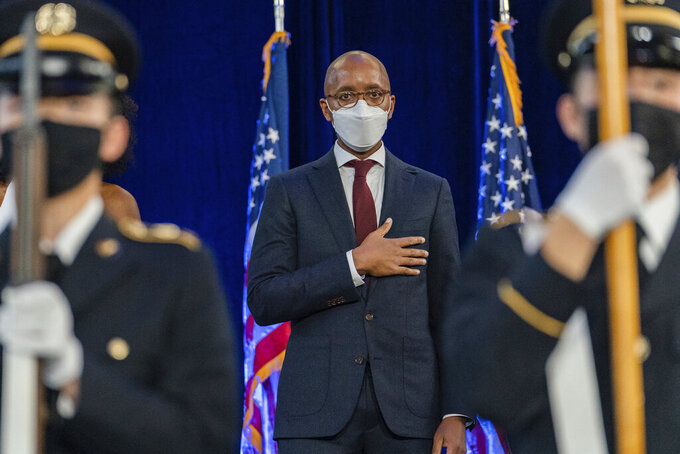 U.S. Attorney Damian Williams made the comments after he was formally sworn in as the first Black top federal law enforcement official in the Southern District of New York — one of the country’s busiest offices — by Manhattan Chief U.S. District Judge Laura Taylor Swain.

Williams said he planned to engage with community partners, faith groups, advocacy organizations and young people “to let them know that they have my attention and they have my ear.”

But, he added, “I also know that's not enough because you know and I know that we are living in troubled times.”

The remarks were delivered to about 500 current and former law enforcement personnel who gathered to hear Senate Majority Leader Chuck Schumer and Garland praise Williams as the right leader for the moment at the Harlem Armory, which once housed a widely praised all-Black U.S. Army infantry regiment known as the “Harlem Hellfighters.”

The Hellfighters, who spent more days fighting in World War I than any other Army regiment, were commanded by Col. William Hayward, a white lawyer who became Manhattan U.S. attorney in 1921. He hired the first Black Manhattan federal prosecutor — a former Hellfighter — and the first female prosecutor in the office as well.

Williams, 41, once served as a law clerk for Garland when he was a Federal Circuit judge in Washington and was recommended to the U.S. attorney’s post by Schumer.

In his speech, Williams briefly got choked up thanking his family and recent predecessors, including Audrey Strauss, whom he replaced when his nomination was confirmed several weeks ago; Preet Bharara, who hired him; and Joon Kim, who he said “saw something special in me."

He sparked sustained applause when he mentioned Geoffrey S. Berman, a Republican who served as U.S. attorney during much of Donald Trump's presidential term. Berman became known in what prosecutors like to affectionately call the “Sovereign District of New York” for standing up to Washington's demands and left office in June 2020 after a standoff with then-Attorney General William Barr over investigations into Trump's allies.

Williams said Berman promoted him and “when the hour demanded true courage and independence and a demonstration of what it means to be a Southern District of New York prosecutor, he showed all of America what that means.”

Noticeably absent was Rudy Giuliani, a former Manhattan U.S. attorney who is now under investigation by that same office over whether he broke the law when he failed to register as an agent of a foreign country for his dealings overseas. Giuliani has said he did nothing wrong and was working for Trump at the time as his personal lawyer.